The new kids have been going out for a couple of days now and are really doing good.  DJ the pony is still mostly hanging around the pen area and is usually one of the first ones in when round-up for feeding starts.  He mostly is by himself so far.  Big Gus checked him out the first day, but I haven't seen them hanging around with each other.

Leroy and Jackson really enjoy being out of the pen.  The first time we tried to put all 3 of them back in, it took awhile for them to figure out what we wanted them to do.  John found out a bucket with pellets in it being shaken, gets their attention and they will follow.

Yesterday we had a tour.  We started out with everyone in their pens and the plan was to let them out as we went along.  The lady had brought some homemade equine treats, oats, shredded carrots and molasses.  Once those were available we had to stop letting them out of the pens. They obviously are much tastier than animal crackers, which they all love...............!!!  LOL

Jackson and Leroy were the first ones let out and they stayed on the tour all the way to the end.  Even after the special cookies weren't being passed out.  They enjoyed being with the people and getting petted along the way.  So they probably will be good little ambassadors for people to get familiar with donkeys.  I wish I had my camera, but I didn't.


So I will add a video one of the neighbors that lives in the valley took of some visitors he had a few nights ago.  We very rarely even see tracks of javelina on our property anymore.  When we moved out here they were all over this area.  But they probably had a few run-ins with the donkeys and decided to go someplace else that was friendlier.

Linda sent some pictures and videos from Colorado.  It looks like the donkeys are enjoying their change of scenery.

Suzanne and Frijolita checking out some  of the training area.  Suzanne is letting Frijolita do all the work.......!!  LOL 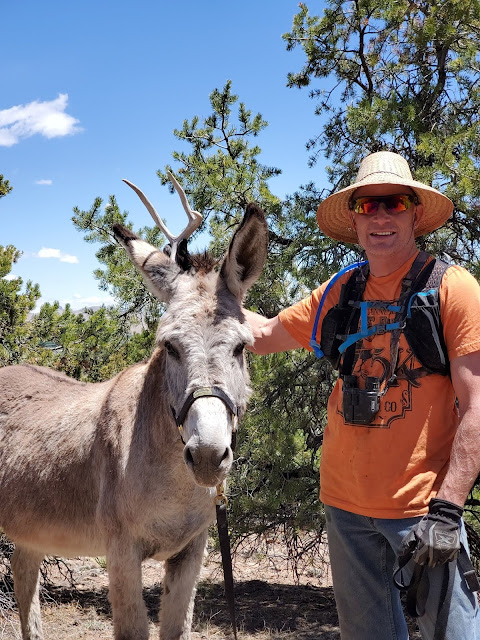 Benji got to go out on an elk antler hunt.  This is one of the past times in Colorado that we don't have in Arizona.  People go out hiking and looking for antlers.  Not sure what they get used for, but do know the dogs love to use them as chew toys.  I would imagine some people use them in crafts too.

Tomorrow morning bright and early, Suzanne and John will be headed back up to the 3 amigos former home up by Phoenix.  There were some items the family wanted to give us, but Suzanne didn't have room for everything, when she picked up them up.  Some hay and feeders all things we can use.  So I will be feeding in the morning by myself.  It's not that bad, except for all the whining and complaining about how long it takes when there is only one person doing it.  I keep telling them there is only one of me and a lot of them, so they will have to be patient.  Doesn't seem to register with most of them at all.

Next week we are suppose to get in a jenny that was left on a property over by Willcox when people moved.  She's suppose to have bad feet, but we haven't seen her or her feet, so won't know anything about her until she gets here.
Posted by Tish at 11:19 AM