It's not much fun to watch, and I'm pretty sure it isn't much fun to have it done.  But because of the neglect of the people responsible for her for quite sometime, she has to go thru the rehabilitation process. 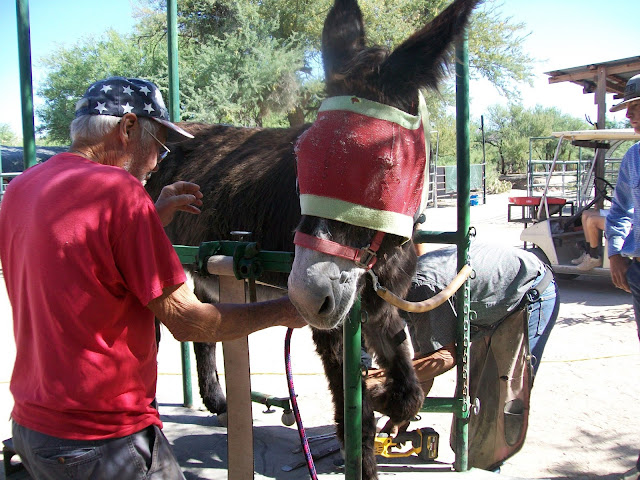 Big Gus' feet were too long for Suzanne to touch up, Tyler trimmed him, so she can have something to start with.  Any attention to Big Gus is just fine, bring it on........!!! LOL

Suzanne, John and I hit the road, as soon as Tyler got done.  We were suppose to go to the NW side of Tucson to see if we could take 3 donkeys.  The people actually have 6 donkeys total, but had said they would keep 3 of them because they have health problems.  The people also have health problems which probably makes it difficult for them to take care of even three.

We have to keep in the back of our mind that just because we have empty pens right now, that in 3 months we will have donkeys returning from Colorado.  At this time we don't know how many will be coming back.  Olivia went yesterday to see if she and Esperanza could be friends.  From all we've heard they are getting along like old girlfriends, well except for Olivia's propensity for thinking all the food available is hers.

There are a few others that went to Colorado that are healthy and if they caught someone's eye could be adopted.....but.........we still have to keep in mind pens and donkey count in the future.

The first thing we noticed was the health problem with the donkeys is habronema fly damage.  None of the donkeys had fly masks on, and had sores below their eyes, which is a common spot.  The woman said the donkeys wouldn't leave the masks on and tore them up.  Unfortunately we are familiar with this problem, which is why we have to buy so many masks each year.

The oldest gelding is in a pen by himself and seemed to have a lot of damage including his sheath area.  His sheath was very swollen and he didn't draw it up the whole time we were there, which is troublesome.  He also seemed very depressed and uninvolved in what was going on around him.  The others were very friendly and seemed to enjoy attention. 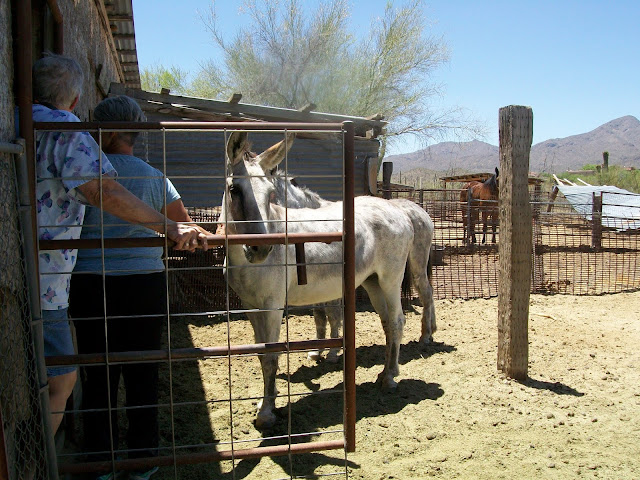 When we left both Suzanne and John said we have to try to get all six of them.  I will call the people tomorrow and see if they will let us take all of them.  But I still have to think ahead to September.  In the meantime, I think we could help all of them with the habronema problem.  I have a woman that is looking for 2 donkeys, so who knows, maybe we can get them cleaned up and find a forever home for some of them.

Is that a horse in the back ground of the last picture or a large donkey? Do these people have other animals that they can't take care of. I feel bad for the old donkey in the pen along. Seems he would be better of put down then left in the conditions in is living in. Glad you might be able to help some. Poor animals.

Yes that is a nice looking horse. They said someone is coming to get the horse. So if we take the donkeys, that would take care of the equine for them.