Tyler came out this morning to reset Gigi's shoes.  She was probably born crippled and has to wear shoes or her front feet will start to twist backwards.  So about every 8 weeks she has to have the shoes either replaced or reset.  Tyler is really good at keeping her as comfortable as possible.

While he was here i asked him to look at DJ's feet.  They looked a little rough to me.  He said they didn't look like they had been rasped, just nipped so he tidied them up a little and DJ looked much better.

The 3 newbies got to go out after breakfast.  Jackson and Leroy had no problem, opened the gate and away they went.  DJ, the pony was a little more reluctant, I have a feeling he has always been in a pen and was a little overwhelmed by going out thru an open gate by himself.  He finally went thru and started exploring 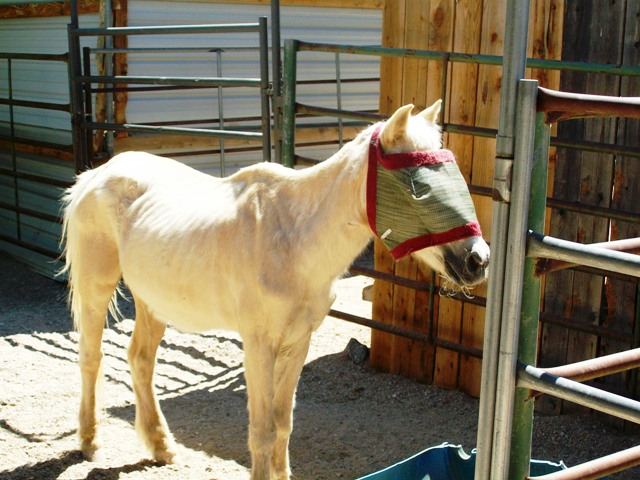 He seemed to be more comfortable exploring some of the other pens at first rather than just taking off thru the brush. 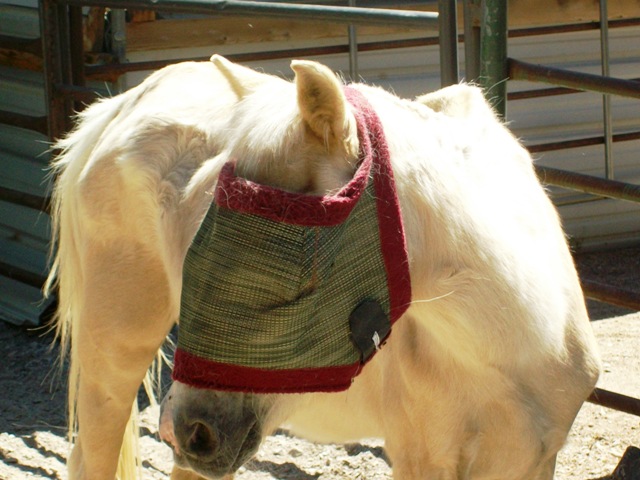 Suzanne brought out her hair trimming equipment and thinned his forelock.  It was almost as thick as his little ears were tall.  He looks much more balanced without all that excess hair.  Next I will tackle the feathers on his legs. 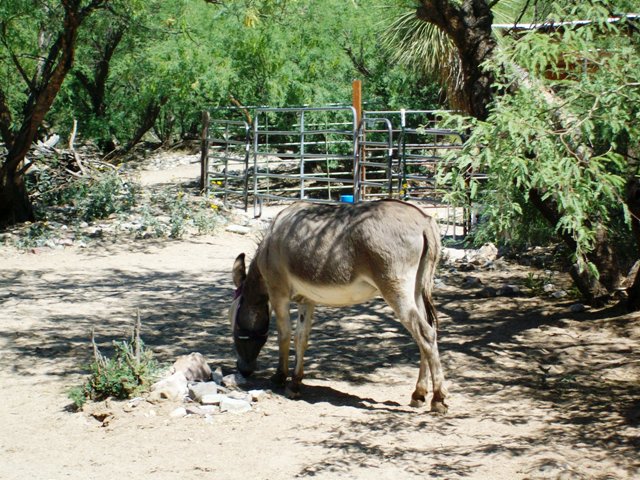 Jackson had no problem investigating.  I wanted to get a video of them when they first came out, but I couldn't move fast enough.....!! LOL 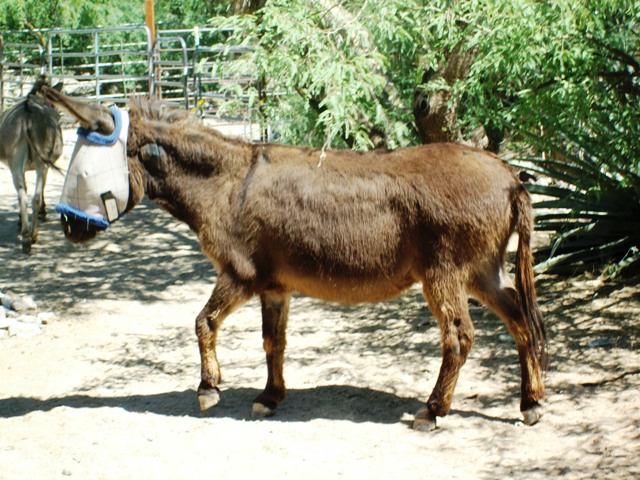 Leroy was having fun running around too 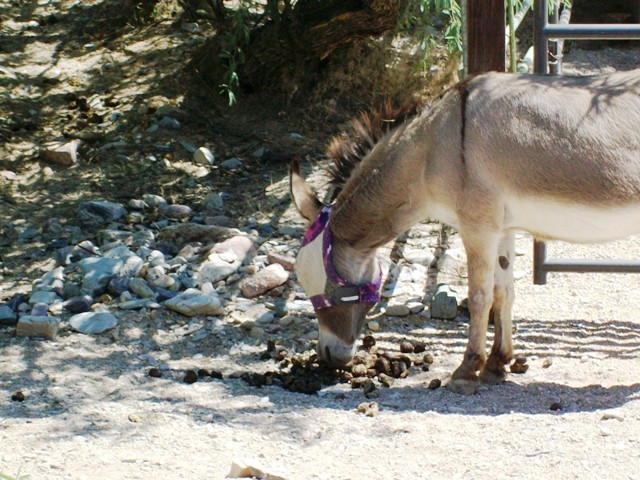 Jackson checking out poo to get to know the other donkeys

John spent time this afternoon sitting out in the golf cart in case they needed a referee.  This morning when Big Gus went out he was being too aggressive with DJ.  John said he thought he was trying to play, but he was being too rough.  So he had to go back in his pen for time out......!!

Casper is the one we worried about, he's always been so aggressive towards horses and mules.  John said when he went out he chased the 2 little donkeys about 50 feet and then went off to find his girls, Tula and Bunny.

I went out later to take the 2nd shift of watching and to let Big Gus out of his pen.  Did notice someone had grabbed Jackson on his back and left a bald spot.

I had a talk with Big Gus before I let him out, shook my finger in his face and told him to behave himself.  Surprisingly he did, although I doubt seriously if it had anything to do with my little talk.......!!  He watched DJ a few minutes walked over smelled him a little bit and that was it. 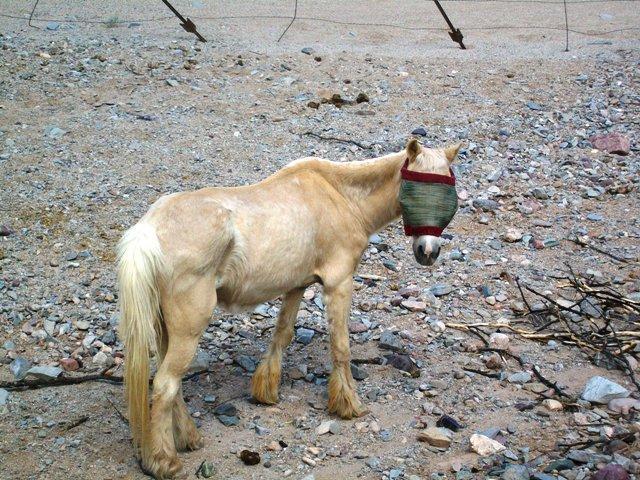 When I went out DJ was down in the wash by himself eating donkey poo.  Makes me believe he is missing something in his diet.  Look at those feathers.......!! 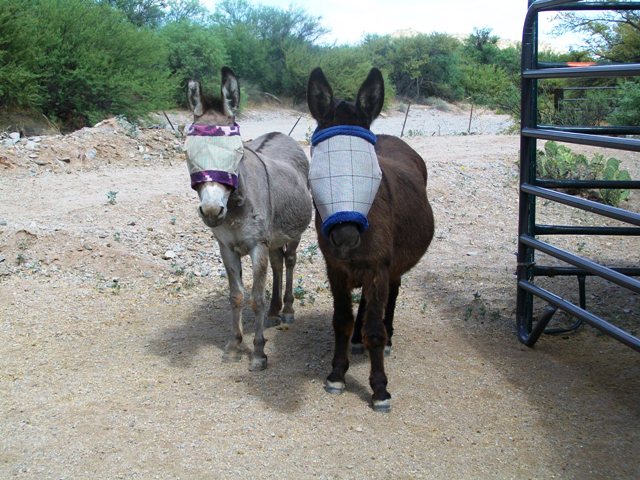 Jackson and Leroy wondering why I'm looking at them 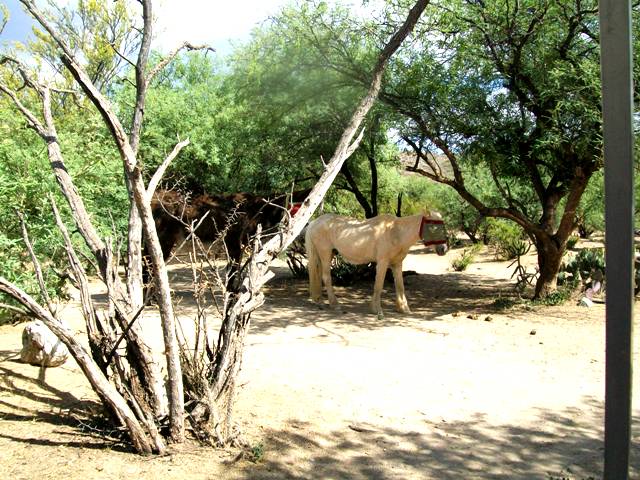 Gus is standing in the shade to the left of DJ, he's camouflaged by the trees and shade.

We haven't tried to put them in to eat this afternoon.  They don't seem to follow or be driven from behind.  Hopefully they won't panic and run every which way.....!!  If they do it might take awhile to get them to understand what they need to do.  It's not much fun to run around trying to direct equine that either don't know what you want them to do, or aren't interested in doing what you want them to do.  LOL  Hopefully it will go smoothly.......!!
Posted by Tish at 4:51 PM