Linda sent this gorgeous picture she took of Olivia in Colorado.  She already has a probable new home with a jenny that recently lost her blind donkey friend.  I think Linda said the woman is interested in pack burro racing, so Olivia's life has changed from pasture pet to a possible life as a racer. 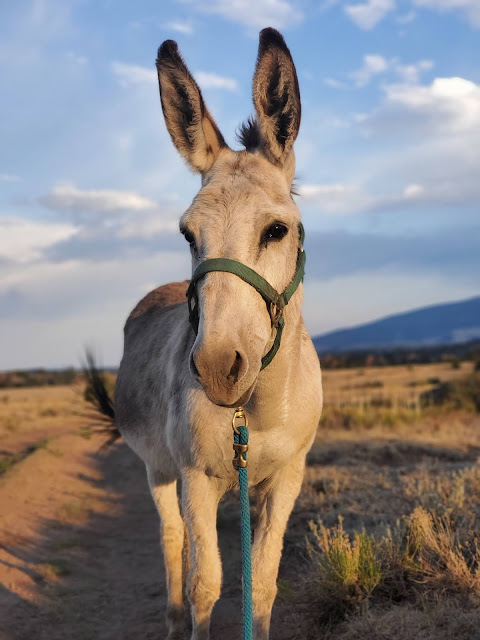 Tyler is hoping to get out Tuesday to trim Sasha's long feet.  He works 7 days a week by appointment, so will have to make some changes to work her in.  I wish we didn't have to disrupt other people's appointments, but she really needs to get those feet trimmed as soon as possible.

She has really settled down, from the first day and seems more than willing to go along with whatever is happening.  She comes over to the corral panel when we go out, so we can pet her or maybe give her a treat.  It sure doesn't take long for us to spoil the new ones.......LOL

Jackson, DJ and Leroy have settled in, learned the routine and Casper isn't bothering them when they are out, so calm now reigns at Forever Home.....at least until someone new comes on the property probably.

Yesterday morning before we went out for chores, we heard the thundering of many hooves.  I looked out and saw Leroy and Jackson running in front of most of the other donkeys.  At first I thought the others were chasing them, but on 2nd thought they were just all running in a herd.  The best thing was Casper the little mini mule wasn't anywhere close to the 2 running in front, he was back in the herd, just running for the fun of it I guess.  They did a couple of circles around the 10 acres and then everyone went their separate ways, guess it was just everyone enjoying the cool morning having a little exercise.


This picture is so cute. 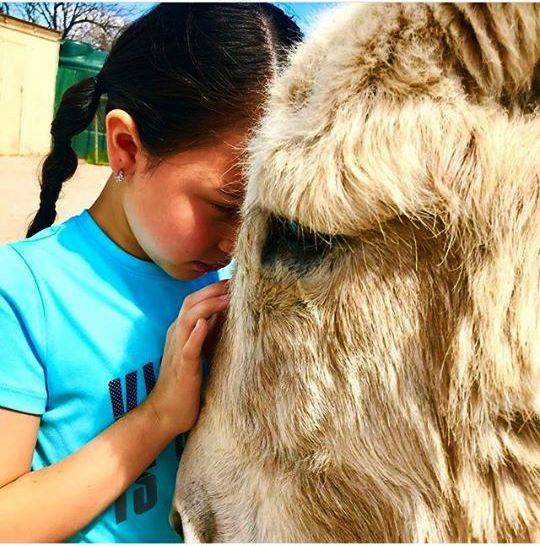 This is a little 8 year old girl named Elin.  She came out earlier this year with her family to visit with the donkeys and really enjoyed the donkeys.  In fact her grandmother said coming to see the donkeys was about their favorite thing to do in SE Arizona.  Looks like Jasper enjoyed it too.....!!