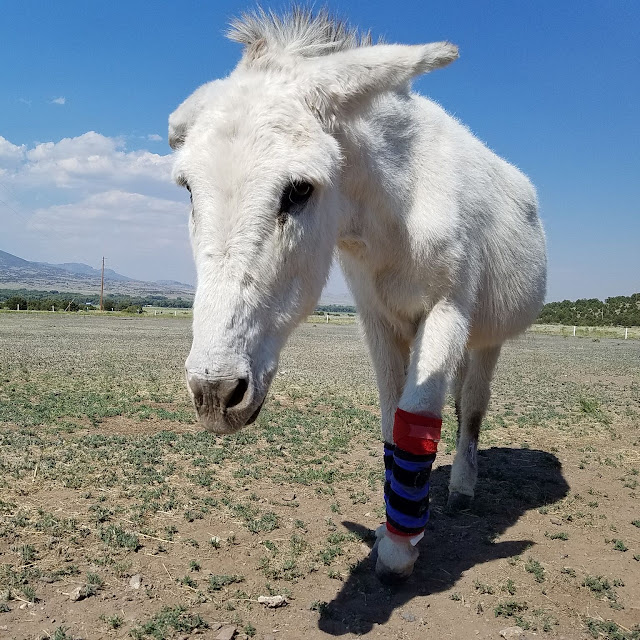 As of this week, Quilla is having to have his legs covered, so although being in Colorado does help with the skin problems he has on his legs, it isn't a perfect answer to the problem.  He left here with leggings on and has been up there 2 months, so it certainly does help being in a cooler climate.


Linda is getting to try to figure out what is the best treatment.  Believe me, I know how that goes, the vets usually have their favorite treatment for skin conditions.  It's something that has worked for them over the years and they swear by it.

After years of trying to heal sores on different donkeys, I have come to the conclusion, the skin conditions are not all caused by the same thing, they all don't look the same and on different donkeys, different "cures" work better or worse.  So it's pretty much a guessing game.  I have discovered Cortizone10, found it at the end of the season last year and it seemed to work really well.  But the fly season was winding down,  so were they getting better on their own, or was it really making a difference?  This spring I started out using it and it is pretty good, it is keeping Rosie's belly under control, which by this time her belly is usually a dripping bloody mess.  Hopefully Linda will be able to keep his legs under control with the first aid stuff I sent with her.

Things around here are about the same, it's been so hot no one wants to do anything.  It's suppose to be a little cooler next week, but all that really means is, it won't be hot enough to break records..!!!  LOL

I race tomorrow night, it's suppose to be 108* tomorrow, hopefully it will cool off when the sun goes down.  I've been having a problem with the car jumping out of gear.  It doesn't happen often, but when it does it's very irritating.  I'd mentioned earlier about getting another shifter, John talked to a racing buddy that also works in a transmission shop.  He had actually had my tranny apart last winter to lock me out of 5th gear, which I seemed to have an affinity for finding when looking for 3rd.  Believe me the 2 gears are NOT interchangeable on the race track........LOL  Ray said the tranny looked good when he was in it, that it was probably the motor mounts.  As soon as John hung up from talking to Ray, he ran up to the garage to pull a motor mount.........well after we watched a How-To remove motor mounts on you-tube.....!!  John is a Chevy man, and isn't real sure about these little 4 cylinder cars, although he is finding out that underneath, they all are almost identical.  We've had Kias and the Dodge Neon and he said the motor mounts were alike.  He's ran across other things like that too.

When he got the 1st one out he brought it down for me to see.  YIKES, all of the rubber do-nut inside the medal was torn up and allowed the motor to shift around under acceleration.  They all were really torn up, and desperately needed to be replaced.  That's what he's doing today, he just came in to tell me 2 of them went in real easy, but the 3rd one isn't cooperating.  That isn't exactly what he said, his language was a little more "colorful"..........!!!     No wonder the poor little thing couldn't stay in gear. 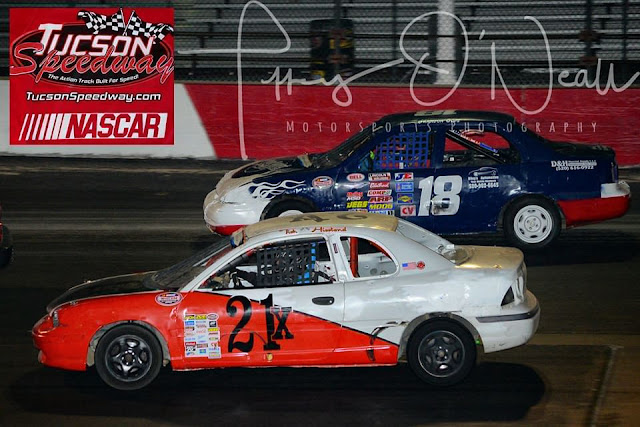 Here's the guy that is tied with me for 1st place and will probably surge ahead tomorrow night.
Posted by Tish at 11:26 AM