It's not getting any cooler, well it is, but it's still over 100* every day, so it's hard to tell.....!!  LOL  John stays out in it most of the day, I'm a "woose" I don't handle heat if I can stay out of it.  Still no chance of rain, although the humidity is rising.  They tell us the high humidity is necessary to get the rain.  BUT, many years we get the heat and humidity and not much rain if any.

I raced Saturday night as planned and did pretty good, finished 3rd, running pretty close behind my two nemesis.  Brandon broke our tie, as I knew he would unless he had bad luck.  He's now 9 points ahead of me.  The other guy is about 40 points behind me, but he won and passed inspection this time.  As long as I keep finishing good, it will take him awhile to nibble away at my lead on him, but I'm sure he'll catch me before the end of the season.

Actually they both were having problems.  Brandon's car was over heating, I was close enough to him to get his water all over my face shield.  The other guy's car was smoking and by the end of the race, John thinks it blew up on the last lap.  Maybe if the race had been 5 laps longer, the finish would have been different.  John says I can't wish them bad luck, so I'm just making an observation......!!  LOL

Our son Rod, set fast time in his modified and finished 3rd in his main event.  I teased him that he didn't want to let his mom finish better than he did. 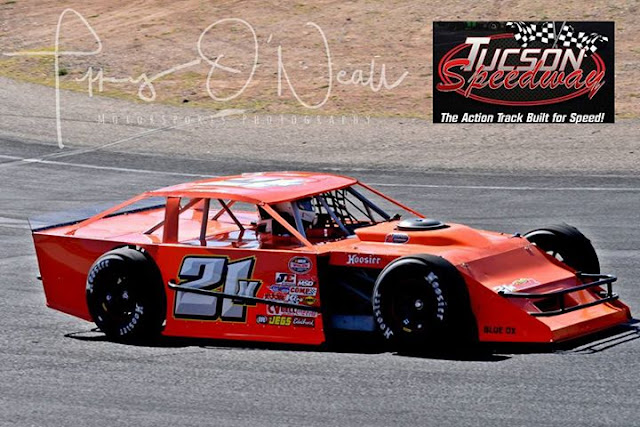 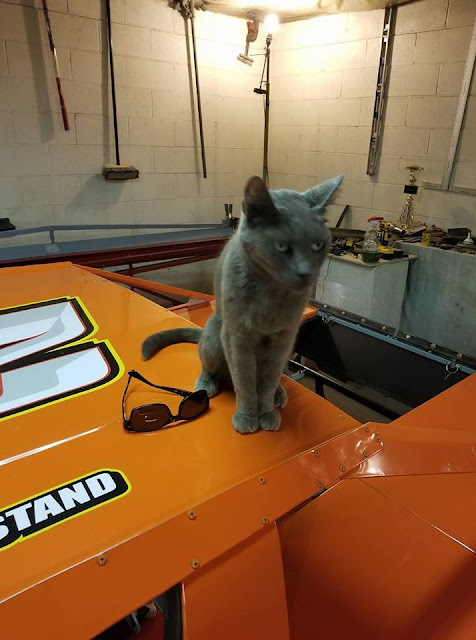 This is Rita Race Cat.  Rod has had her for years, she was a stray and like most cats has become indispensable by having her curious nose in any and everything going on in Rod's garage.  She sleeps in the seat of his modified and when he brings the car home from the track, he said she goes all over it, checking it for damage I guess.  Or heaven for bid, some other cat being on "her" car....!!

All the donkeys are doing good, unfortunately mesquite bean season is getting here in a hurry, I guess the hot weather is quickening the process.  The last few days we have noticed the tree limbs are really moving around a lot.  Perhaps because the donkeys are grabbing the limbs they can reach and shaking them until the beans fall or they break the limb, whichever happens first.  We have 5 that I already consider obese or close to it.  Sure wish the range cattle were still around, so we could let them in to clean the beans up in Burroland.  But they aren't so we will have to try to get thru the season without weight gain or colic.

It was about this time last year when Miss Penny Packer coliced with an impaction of mesquite beans in her gut and had to have surgery.  Sure don't want to have to go thru that again, but we would.  I know the clinic thought we were crazy, having colic surgery on a 20 some year old, unfriendly donkey that is hunchbacked and has had a broken jaw and lousy teeth.  But she came thru the surgery with flying colors and has had a chance to eat a lot more animal crackers, so why not.  When John lets her out at bedtime, she follows him into all the pens and if he doesn't pay her with animal crackers as quick as she thinks he should, he says she pokes him in the back with her nose.  If that doesn't work then her head goes under his arm and she starts pushing and lifting his arm.  Last night when he came in she followed him all the way to the gate.  When he disappeared into the house she started yelling.  I told him Penny didn't get enough cookies, but he didn't want to go out and give her a cookie, because by tonight it would become a habit........!!!  Poor little Penny...........LOL