This morning Buddy was acting colicky laying down and wiggling around.  Between that and seeing how much weight Rosie and Coquette have put on, not to mention Gizmo the little mule is starting to plumb up nicely too.  So..........I made the decision that everybody's time out of their pens is going to be sharply curtailed for awhile.  The problem with this scenario is, if the beans don't get eaten, the beans will still be there when they do get out.  Once the beans fall, if it rains on them they will turn black and the donkeys won't eat them.  But in the meantime there are beans everywhere and every time the wind blows more beans fall.  Our whole acreage is pretty well covered with mesquite beans, so there is no way we could rake them up.

Buddy got a colic dose from Equine Colic Relief USA, and Coquette, Rosie and Gigi got to stay in the pens too.  Doug let the others out at 1pm, much to the disgust of these four.  As of tonight the whole herd will be staying in all night until 1pm tomorrow.  Using this routine, they will get about 4 hours out in the afternoon, but that's all.  I don't know if even 4 hours will be a problem, or if the beans on the ground will continue to be a problem.  We'll just have to see.  I know one thing, they are NOT going to be happy.

When we got home from John's radiation treatment, Buddy had passed some poo, in fact quite a bit with plenty of beans.  And he was acting normal, wanting out of that pen.......!!!  LOL 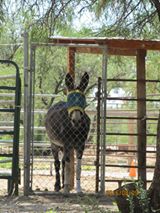 The vet clinic called today and said Penny is doing OK.  She still hasn't eaten much, but they did more x-rays and said she is impacted with mesquite beans.  She actually passed a couple of wads of them and they saw plenty in the x-rays.  Although they did take her out in a grassy area and she ate some grass.  She's had an IV with glucose and will get another one, plus they will tube her again with water and add oil this time.  Hopefully things will start moving soon.

Can you have the fields bush hogged so the bushes will be too small to bear berries for a while? Do the berry bushes grow fast or are they trees?

Actually they are trees. And they have a legume pod like green beans in clusters on them. And they pretty much cover the whole acreage. The wildlife live on them this time of year, just wish we had more wildlife.