We're glad we did the 6 race nights in 10 days, BUT, we are REALLY glad it's over.  Last night I didn't run the heat race, because the night before my radiator got ruined.  John dug thru his junk pile and came up with a radiator that had been fixed with epoxy, and put it in.  John thought it would be best if I didn't run the heat race, just in case the "fix" didn't stay fixed. 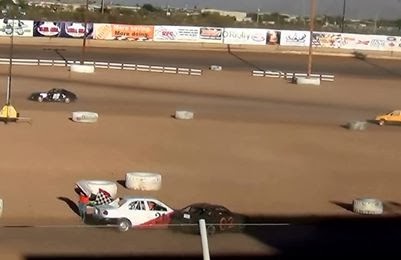 
I finished 4th in the main with no leaks, so that junk radiator has been moved up to spare.  I have to order a new one today, John wants one he can trust.  He finished 6th, with the poor little Toyota, one night he finish 3rd, so we really had a good week.  I had 2 first, 2 seconds and 2 fourths out of 6 races.  I might have done better last night but John lost control of the Toyota when I was passing him and ended up impaled on the front of my car sideways for awhile.  Somewhat like 02 above.  LOL

Gigi is still laying down quite a bit, but seems to still be doing pretty good, considering.  Both of them are doing pretty good on changing over to bermuda hay.  John has a little over a bale of alfalfa hay left so we're hoping by the time it's gone they will be changed over.  Then maybe we can start figuring out how to get Rosie on a diet.  She needs to lose about 200 pounds, so it will take awhile.

I'm sure the donkeys will be happy that Hell Week is over too.  A couple of days they stayed in their pens all day, because the races started so early, it wasn't worth letting them out and then putting them back in.  At least that was our theory, not sure they agreed with us.

Haven't heard back from the lady about the mini mules, so they will probably be going to their foster home, as soon as we get the time and energy to haul them.
Posted by Tish at 9:07 AM