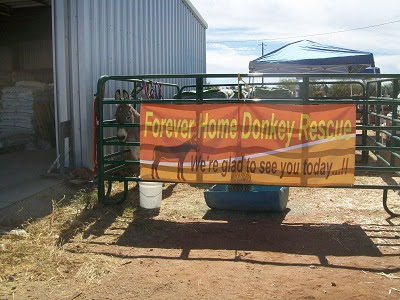 I was hoping our new banner would show up better & you can't hardly see little Buddy Brat peeking around the right side of the banner.  I would imagine he was looking for more people to come by to pet & feed him timothy pellets.  It didn't take him & Pepsi very long to figure out the "drill", people come by, gush & make over them, do some petting, feed some pellets, maybe do some more petting.  Pepsi even ended up with lipstick on his nose......!!!!

He also turn into a "attention" monster.   He decided that all the attention should be his, & let Buddy know this was HIS show & Buddy could stand over there & be quiet.  Of course we let Pepsi know that his behavior was unacceptable & made sure Buddy got his share of attention.

This morning was crisis management as usual, when we have to haul donkeys someplace early.  Lysa was coming to clean pens this morning, but we needed to feed before we left.  We finally decided that we'd load the boys, & John haul them to the Rummage Sale, while I fed.  I followed later in the van.

Let me say that donkeys have a way of ruining the "best laid plans of mice & men".  Buddy went in the trailer like a veteran.  Pepsi hasn't been in a trailer for almost 6 years, & decided he wasn't going.  We figured he's a mini, how much trouble can he be?  Quite a bit, actually.......!!!!!  We found out you can get 3 legs off the ground & still not get him in the trailer.  We also found out that he is a kicker under the right circumstances, & this seemed to be them.  He doesn't just kick once, he kicks like a machine gun.  Good Grief............!!!!  We finally got the front feet in the trailer, I looped a rope around one hind foot, & managed to get it on the trailer floor more or less.  Then John literally dragged him into the trailer by 2 ropes, one on either side of the trailer.  The one leg on the ground he wasn't willing to lift, until the last instant & it got scraped up a little.

When he got there, John said he hopped out of the trailer, walked like a little trooper to the pen, John opened it, & "NOPE, not going in there".  John said 2 guys saw the problem, came over & literally picked him up & threw him in the pen.  I asked if John told them he might kicked, said he didn't have a chance, Pepsi was already in the pen.   Thank goodness he isn't a mammoth..........LOL

We wondered how it would go when we got ready to come home.  Just about like it went in the morning, until 2 women & a man helped.  They even knew what they were doing, so it went pretty good.  John said when he got them home & opened the back of the trailer, there was no problem with them getting out, guess there's "no place like home"............!!!!

We're taking Cisco to an equine dentist tomorrow.  He's been acting a little off lately & eating real slow.  I checked his mouth & didn't find anything, but I'd like someone that knows what they're doing look.  Yesterday afternoon I noticed a bunch of flies, around one of his ears.  I got a flashlight & looked inside........YUCK!  He had a big raw strip about an inch wide that is about 5 inches long.  At the bottom of it is a place that was gooey & slimy.  I've never seen anything like that.  So far I've sprayed the inside of his ear 3 times with Vetericyn.  The difference is amazing, the gooey spot is dry & the red raw strip is scabbed over.  Thank goodness he is very docile, spraying liquid into their ears usually isn't a real big hit.  He lets us know he isn't thrilled, but at least he doesn't try to hurt us..........!!!
Posted by Tish at 8:25 PM