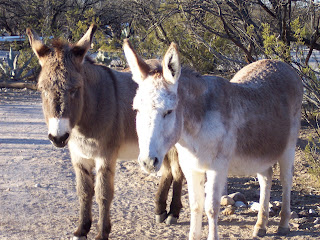 Buster with his Lucy girl.......!!!
This morning when we were getting ready to feed, I noticed Buster had a piece of hoof wall split off & had gravel behind it. Got the nippers to get it off. When I lifted his foot I was shocked at how long his hooves are. They are about 1/2 inch longer than they should be. They are wearing evenly, which is why I hadn't noticed the length. So as soon as he gets thru with breakfast we will see if we can trim them a bit. What it takes Courtney a couple of minutes to do, seems to take us a LOT longer.....!!! I guess we better physically look at everyone else that usually do their own trimming too, just in case there are some others out there that haven't been walking enough. Lucy is one of Courtney's "regulars", as she has been chronically foundered in the past & really has nasty looking feet. We've never had her x-rayed, but I'm sure if we did, the inside looks as bad as the outside.

The little kangaroo rats didn't make it. After 2 days they were not gaining weight & were getting weaker, so John put a piece of cotton with ether on it with them in their nest. To let them keep going downhill until they died, would have been cruel. I'm sure this happens frequently, mother doesn't get home, & babies starve in many wild species. But once a person gets involved we should do our best for them, which I think we did.
Posted by Tish at 10:05 AM