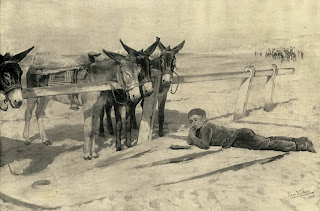 As planned we trimmed on Buster's feet. Bless his little heart he was such a good boy. I don't think his feet have been trimmed since we've had him, which has been over 6 years. He is rather fragile emotionally, although I think he has had good training in the past. But it was probably rather harsh training. Over the years he has learned to trust us & loves to give kisses, by sticking his tongue out the side of his mouth. Depending on your level of acceptance, he prefers to have you hug his head with your cheek on his tongue. But he will settle for a hand if that's your preference.

I sat on a little bucket, put his feet in my lap & trimmed away. He never pulled away or anything, just stood quietly as I spent a LONG time on each foot. If he had wanted to fuss, I was in a very vunerable position, but he was great.

Then last night he choked on hay pellets. We called the Vet after about an hour & left a message. It took about 3 hours before he finally cleared. Soon after the Vet called back & we discussed the ramifications of feeding pellets. I've had this discussion before with just about every Vet I know. Although we mix them with soaked beet pulp, they still hold their shape & obviously can get hung up on their way to the stomach.

John flies back to Indiana tomorrow for his Mom's memorial. He'll only be gone until Monday or 8 feeding sessions, depending on how you look at it. Up until a couple of days ago, they had been doing real good on coming in to be fed. But for some reason, independence has set in & they don't seem to see a need to come in until they are good & ready. John usually does round-up & he isn't quite as "forceful" as I am. Since there are a lot of them, & only one of me, I think it works out much better, if they take responsibility for showing up without me having to go ferret them out of the brush. I'm sure by the time he gets back, we'll all be organized & cooperative, at least I hope so. It's suppose to cool off into the low 90's, which will be nice.
Posted by Tish at 4:08 PM