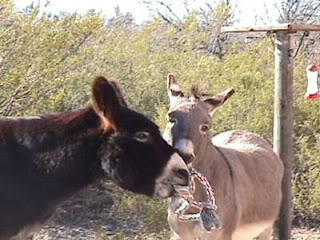 Had a good night of racing last night. John finished 7th in the main event out of 20 & our son finished 11th, after having to go into the infield for a tire change. Brought both cars home relatively unharmed, except for the back end of John's car. One of the other drivers used the left rear fender of John's car to stop, rather than using the brake pedal. He got blackflagged & fined, & John gets to do body work this week. Anytime you bring them home with the running gear OK, & the frame & body fairly straight, it was a fun night. We'll do it again next Saturday night. I found 2 pennies at the track last night, so I hope the good luck will carry over.......!!!!

After the races we went with some of the other racers to TTT (oldest family owned truck stop still operating in the U.S) to get something to eat. They gave John a birthday card with a donkey on it, a lot of the driver's had signed. All in all John had great birthday. Forty years ago when we started this particular hobby, I don't remember thinking, "gee whiz, I bet we'll be doing this in 40 years"................!!!!! (G)

Of course at that time we didn't know we would be doing donkey rescue either. We never know what twists & turns life will deal us, do we? The gang was happy when we got home about 1:30 am. They had been cooling their heels in the pens, while we were out having fun. When we come in late like that & they hear us unlocking the gate, they start yelling. Of course there is no sleep-in for the humans, the cats expect breakfast at the usual time in the morning. And once there is movement in the house, the equine also expect breakfast to be served. John use to use Sundays to wash the race car & check it over to get an idea of what needed to be done to get it race ready. But as the years pass, Monday or Tuesday or even Wednesday works just as well............!!! "Mature" people have to save energy where they can you know...............!!! (G)
Posted by Tish at 9:30 AM

Glad the drivers made it home safe and sound.