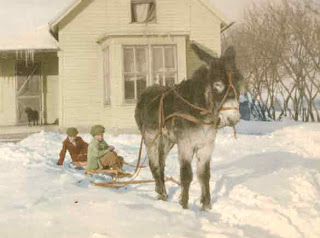 Sha'ba seems to be back to normal, although he still isn't cleaning his feed bucket. In fact this morning he wanted out & left about half of his breakfast. I don't think he is a big mesquite bean eater, although a lot of the others are eating the green mesquite beans hanging in the trees. They haven't ripened yet, but I anticipate they will pretty soon. We are watching poo for beans & when they start dominating the poo, some of them will be staying in pens for awhile.

I'm waiting for Courtney to come out to trim the ones that need it. The victims had to stay in their pens this morning because we didn't know for sure when she would get here. Daisy has stayed by Chester's pen most of the day. I didn't even know she had a "thing" for him, she's usually with Frijolita.

Speaking of Frijolita this morning while she was finishing up her hay I casually reached down to pick up her foot to see if she needed to be trimmed today. Well, she took off like I had insulted her. Sigh.................... chasing her was not what I had planned, so off we went. She caught up with Tula & started following her. Tula certainly didn't want to be chased by me, so she started trying to escape, & of course Frijolita kept following & I kept following. Heard a noise behind me, turned around & there was Daisy, also following. Frijolita would stop, I would pet & as soon as I reached for her foot, she'd take off again. And the entourage continued............!!!! On about the 3rd trip thru the pen area John what I was doing. He was picking up poo which is what I was suppose to be doing.....!!!! One time Tula started to go into her pen, because she knows that is neutral territory. As she got close to the gate, she started kicking back at Frijolita. I guess she had figured out Frijolita was the one I wanted & was trying to tell her to go away. Daisy girl was hanging in there. After about 3 or 4 more tours around the 10 acres, she stopped, planted her feet, I walked up petted her, told her what a silly girl she was, reached down & picked up her foot. After a couple of seconds I tried to put it down & she held it up in the air. I guess she was trying to tell me after all that, the least I could do was get a good look.......!!!! (G) One thing I did notice, in all that walking around she never once hiked her hind legs up with string halt, which is great. Maybe the acupuncture Dr. Weaver did, has made a difference.

Yesterday when they all came in for breakfast, Chester & Pepper came in about the same time & were standing outside the pens. Old Pepper started pushing his chin out at Chester & tried to intimidate Chester by putting his neck across Chester's neck. Silly old fool, Chester could clean his clock if he wanted to. Pepper doesn't have a clue that he is old, crippled & really should take life easy. He chases the girls, tries to intimidate the boys & in general seems to think he's "hot stuff".....!!!!!!
Posted by Tish at 2:18 PM