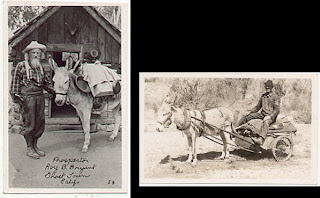 We had to make a trip to Phoenix yesterday. That is always fun, we have to feed early, in order for the gang to have time to finish eating. Given a choice between eating early or staying in their pens all day, I can tell you which they would choose.............!!! Of course eating early is one of their favorite things anyway.

The day before Dr. Weaver came out to do acupuncture on Max & Frijolita again. He said Max's hips are actually more level than they were, even though he's been flopping around a lot & falling in cactus. Frijolita has string halt & she really has improved since he was here a month ago. I haven't seen her hiking her back legs at all. So he gave her another treatment. Hopefully there will be some long term improvement for her. She & Chester are kind of an "item" & they would make a wonderful addition to the right home. It would take some one that wasn't looking for perfect donkeys, but wanted beautiful donkeys with sweet personalities. They both love attention & even though Chester was a roping donkey, he doesn't hold any grudge at all.

Dr. Weaver doesn't think acupuncture would help Pepper, & said my white willow bark, substi-Bute, & hylaun is probably as good as anything to help with his poor old legs. The old buzzard was checking out the girls this morning, to see if anyone thought he was cute, so he's doing pretty good for the shape he is in. I'm not sure any of them appreciate his attention, but it doesn't seem to hurt his feelings at all. Earlier this year he was so very thin, & I couldn't get him to eat anymore than he would eat. But I've started adding a lot of water to his feed, & also have been giving him Calf-manna & he's actually putting on a little weight. Someone on one of the groups mentioned Calf-manna, so I checked it out. Good heavens, they need to change the name, you can feed it to just about anything, including chickens. It's been around since 1931 & is touted as a healthy feed. I think it has licorice in it, which seems to be a real hit, not only with Pepper, but with Sha'ba & Max. All 3 of those have a hard time holding their weight.

Today is John's 69th birthday, & he is going to drive the race car tonight instead of our grandson. I hope he keeps it between the fences, doesn't run over anyone, or get run over & keeps the greasy side down..........!!!!! (G) Our son will be racing our other car in the same races, so maybe he'll look out for his Dad. Actually it doesn't work that way, if he tried watching out for his Dad, he'd probably get run over. I just hope they don't run over each other, that would really be bad.........!!!! (G)
Posted by Tish at 9:46 AM

I love your old photos of the working donkeys. Where do you have them from?
Will be waiting for your next (post-race) post, with the good news.

Happy Birthday John!!!
From Harley,Rocky&the rest of the McMillan Family. :-)

John said to thank you for the birthday wishes. He really did have a great birthday, & thank you Dina for the longevity blessing, 120 sounds good to me.

A few years ago, someone on a donkey group I belong to was going to make a trash can covered with donkeys. So they put out the word to see if anyone had pictures they would share. At the time I didn't have a use for them, but they were too good to not keep. Since then I keep an eye out for others when I'm on the internet. The old ones are really wonderful..........!!!!

If you ever have time, you might enjoy seeing the donkeys in my life by clicking on Donkey in the left-hand margin, under Labels.