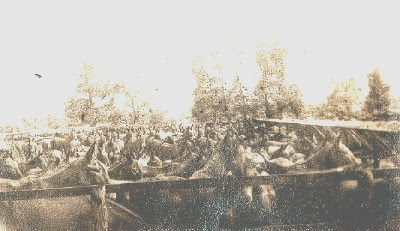 We don't have this many, but sometimes it seems like it..............!!!! I would imagine this picture was taken during WW1, in the mule holding pens for the war effort. Might not be, but they used a lot of mules in that war, & had gathering areas all over the country.

Everyone is doing pretty good. Haven't heard from Cinder's mom yet, as to when she will be picking her up. Right now all the pens are full. We moved Sugar out to eat with the 4 that don't eat in pens, when Tula came home. Now it looks like we will be picking up a new little guy, when we take Buddy & Molly up to the clinic in Gilbert the 17th. Got a call this week, about Seabiscuit, (Not sure I can live with that name.......!!! (G) The man that has him, bought him from ropers with a broken shoulder. It was x-rayed late last year & it wasn't a bad break, but he still limps & although the man has horses, he doesn't really have a place for the donkey. As John says, there always seems to be a place for one more. The man will meet us at the clinic & transfer him to our trailer. Hopefully Cinder will be gone, so we can put him in her pen. We actually have more corral panels, & could build another pen, but have already used up all the "easy" places to put pens. Besides if we build more pens, we'll have areas for more donkeys, which might not be a good idea........!!!!
Posted by Tish at 10:44 AM