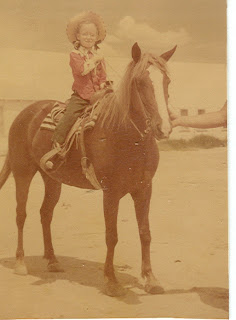 This picture of Queenie & me was taken in the summer of 1951. We had a rough & rocky relationship, up to & including me doing a quick dismount on my head in the 4th of July parade. I still remember sorta sitting up as a cop ran thru the horses to grab me & watching the crowd part as she took off for parts unknown. It wasn't her fault, the small cannon being set off wasn't what she was expecting. And I wasn't expecting her to buck. Smiley Burnett was in the parade too, which I thought was exciting........!!! I think he stayed on his horse for the whole parade though, unlike me.........!!!

Yesterday we hauled an Arab stallion to Tucson for a friend. Sultan was going in for training as a Sport horse. I guess this is a new division for showing horses. I asked the trainer about it, & still don't know for sure what they do. They have a large operation, there were 3 large barns with row after row of stalls. The stalls were only about 12 x 12, & built in such a way the horses can't see into the stalls beside them. Sultan was not happy at being put in a stall & started kicking & snorting. I can't blame him, I feel bad when any of our guys have to stay in a pen & our pens are at least 24 x 26.

They also had a pretty spotted donkey named Cecil. Unfortunately Cecil is eating alfalfa & more of it than he needs. His crest is in danger of falling over & he has fat pockets all over his body. Poor little guy, people just don't realize how dangerous a high sugar - starch, diet is for donkeys. And this is people that obviously are very knowledgable about equines. In fact when Sultan came out of the trailer, they commented on his weight & probable lack of exercise. Yet they don't see a possible problem of their own.