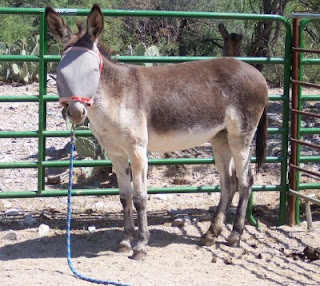 I took this picture of Tula this morning. We picked her up from Terry's yesterday afternoon. She was not cooperating with Terry, & in fact was turning Terry's 2 donkeys into wild donkeys. She also is very vocal & has a healthy set of lungs. Terry lives on an acreage, but still has neighbors that might not think donkey braying is musical. We all decided if Miss Tula wasn't going to cooperate & was going to be disruptive, then she might as well come back here.

We picked her up, came home, let her out of the trailer into the pens, she trotted back to her pen, turned around & looked at us like, "Now what". She remembers the routine around here & was very upset last night when everyone else got to go over on Burroland & she stayed in the pen.

You will notice she has a halter on with a rope hanging from it. I started out this morning with upping the ante in this relationship. She has never been afraid of people, although she is afraid of what they are going to do to her. We waited for her to build trust with us. Terry worked with her very gently & thought she would come around. Neither way worked, so I am going to push her to accept something new every day. Today she is walking around in her pen with a rope hanging from a halter. Doesn't seem to bother her, & in fact she walks with her head turned to the side, which leads me to believe, she's been down this road before.

Found a pocket of habronema larvae on Sha'ba's sheath this morning. I've been doctoring it for awhile, knew they were in there, but had to wait till they came to the surface. I use to dig them out, but have found out if I keep ivermectrin on the area, in a few days they die & fall out.

Jenny has lost a large piece off the front of her right front hoof. It's the area that had infection trapped in the hoof when she came here. It had to be cut out & soaked to get rid of the infection. That made the area thin walled & now that it's grown down to the ground it's breaking off. Hopefully it won't break off deep enough to make her lame.
Posted by Tish at 11:31 AM