CHESTER GOT HIS FEET TRIMMED 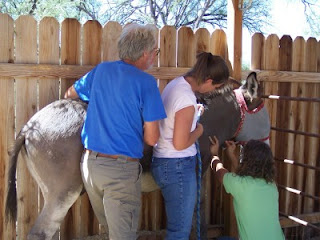 Before they could be trimmed, he had to go to sleep for awhile. This is Dr. Tibbets searching for the vein. John & Katie weren't just standing there observing, they had him pinned against the fence. For some reason he wasn't the least bit interested in cooperating with all these people. Actually it went better than it could have. He's not mean & although he tried to avoid us, he gave in with a certain amount of grace.

Katie trimmed off a bunch of hoof & frog. She grabbed hold of the frog & started pulling. I thought maybe she was going to pull his frog off his foot, but it was all overgrowth from not being trimmed in a long time. His feet look good & this afternoon, he seemed to be moving better. I'll give him a couple of days to get use to his new feet, & then let him out to start roaming with the rest of them. I really think he's going to have better use of his shoulder & will be able to walk easier, once he gets out & gets some exercise. 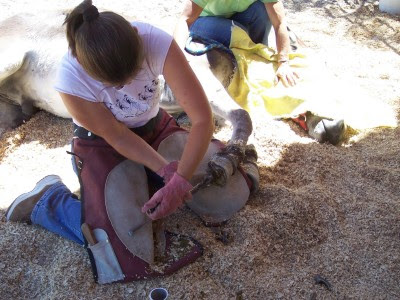 Dr. Tibbets also removed the proud flesh off Jenny's foot. As we expected it really bled, & had to be wrapped in a pressure bandage. The worse thing was behind the proud flesh were maggots. The flies really liked that foot, now I know why. UGH!

Had to lance a large swollen area on Pepper's nose this morning, probably an infected cactus thorn. Poor old boy, it looked sore & from the way he acted it was. He doesn't like to be messed with & lets you know it. He throws his head around, & when the area of interest is on his muzzle, it's a rather hit & miss operation. This evening it looked pretty good, so hopefully he'll be OK in the morning.

Buddy's jaw is still swollen where the tumor was removed from the bone last week. Haven't heard about the biopsy yet. Dr. Taylor was really interested in finding out what kind of tumor it was, since it looked rather unusual.
Posted by Tish at 8:51 PM