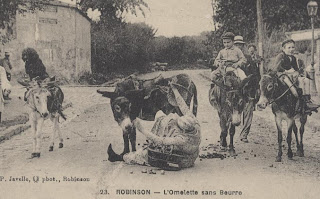 According to the weatherman it's going to get hotter in the next couple of days. It's 109.9 at 1:00 in the afternoon, so I would imagine it will get a little warmer before the day is done.

Everyone seems to be doing pretty good right now, maybe it's too hot to get into mischief. BlackJack & Buddy have really been letting us know lately that they are tired of being in the Fat Farm 24/7. Although neither of them has lost much weight, at least their necks are not as hard as they were. So this afternoon when I let the minis out, I let BJ, Buddy & Cisco out also. The first thing Buddy did, was run over to Shiloh & challenge him for the ground he was standing on. WHY...??? Poor Shiloh wasn't doing a thing except standing. I yelled at Buddy & told him to mind his own business, & about that time, heard noise at the hay barn, like someone trying to knock down the corral panels that keep the hungry hoard from going in & eating their winter supply of hay. Sure enough there is BlackJack, pawing at the panels like he thought they might fall down. He's not been out of the pen, since the hay was delivered, but has been able to see it, just across the driveway. I found a stick, & pounded on his butt for quite awhile, before he decided to give up his position. I'm sure now that I'm in the house, he's back, trying to figure out how to get into the "Mother Lode of Hay"..........!!!! If his neck hardens he will find himself right back in the Fat Farm. That is one of the first ways to tell an equine is over eating & probably the wrong things, if they get a "cresty" neck. BJ is insulin resistant, so he already has one strike against him. Poor little Buddy Brat, just looks like a very lumpy unmade bed. If he has lost any weight since he's been incarcerated, it doesn't show. I guess the only way to get weight off him is to put him in a pen by himself, with minimum food to eat. I'm not even sure that would work, because he's been competing with BJ & Cisco for his hay, & still hasn't lost weight.
Posted by Tish at 1:19 PM

where do you get those great sepia photos or postcards? they are amazing. that one is quite funny.

I'm sure the guy laying on the ground wouldn't agree that it's funny........!!! On one of the donkey groups I belong to, someone asked about old pictures. They wanted to decoupage a wastebasket with old donkey pictures. A lot of people posted pics, postcards, etc, & I copied all of them. At the time I didn't have a use for them, but thought they were neat & worth keeping.