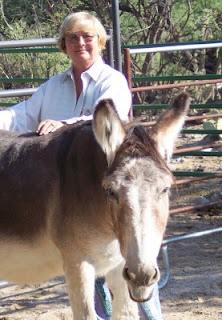 Here is a picture of Jack, being groomed on his first morning here. Annette & David came out to volunteer some time with the donkeys & Annette loves to groom. Jack loves to be groomed & I think he would have stood there, & let her rub all the hair off his body, especially on his butt. He's another one that thinks butt "scritches" make his world go round. Poor David got stuck with poo pick-up, not quite as glamorous, but necessary, unfortunately.

Tomorrow we will do a home study down by Gleeson for Jack's new home. If it works out he will have a new buddy & some horses on an acreage, along with a Mom that sounds perfect.
The picture on the right is Molly, the mule. Isn't she the cutest little thing? We are taking care of her while her owner, & also us, try to find her a good home. Her papers show she was 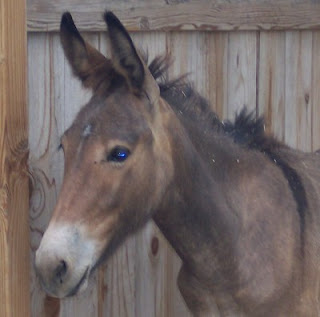 brought to Arizona as a 5 month old weanling from North Dakota, ran thru an auction about 3 months later ran thru another auction, where this woman bought her in March. In May she noticed feces dripping from her belly line & called the Vet. She had 3 fistulas with abscessing & the recommendation was to put her down. The woman wouldn't do it, so they did surgery & a regime of antibiotics. Now that she's healthy & feeling good, she's too much for the woman's mini-horses.

Since Sugar's buddy Remington is going to his new home today, & Molly is just about her size, I'm hoping they will team up as girlfriends. I have a feeling if she stays here very long, we won't be looking too hard for her a home.......!!!! (G)
Posted by Tish at 10:22 AM