We loaded Gizmo and headed to Kris and Jim's place yesterday afternoon.  Gizmo wasn't real thrilled about a trailer ride, but I do think he was a little better about getting in the trailer, than when we picked him up last spring up in Show Low.  He almost took John for a "ski" ride, John was in the trailer and Gizmo didn't want to go in the trailer.  John hung onto the rope, managed to fly out of the trailer, land on his feet and get Gizmo to slow down, before the rope went thru his hand.  And didn't get any rope burns in the process, a good reason to use cotton leads.  You would think by this time, we would have learned to wear gloves when working with ropes, but..........guess not..........!!! 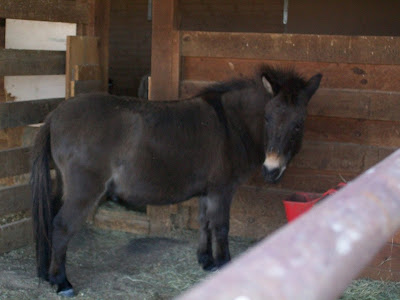 Kris put him in his stall between PoohBear on the left and Reba on the right.  You can tell how upset he was, Kris only treats in the feed buckets and he was enjoying black sunflower seeds and could have cared less about the girls on either side.  We warned them, that he is mouthy.  Everyone here except me, carries animal crackers in their pockets and Gizmo was well aware of that.  So he would use his mouth to get the point across, not the teeth, he just nibbled with his lips.  And of course was usually rewarded with a cookie.........GRRRRRR........!!!   That is all going to be discontinued, there will be RULES at Kris' barn........LOL 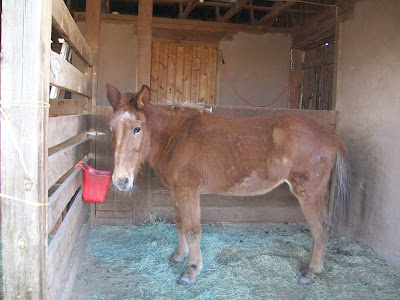 This is Reba, she's about 34 years old, kinda showing her age, but all in all looks pretty good. 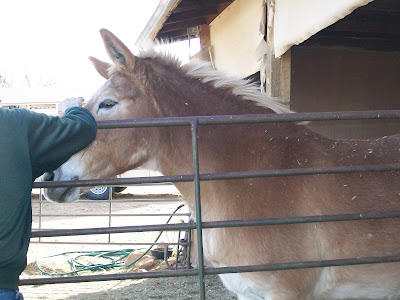 This is Pooh, she is a Haflinger mule, really pretty and is the equine in charge, I can't tell you how unimpressed Gizmo was.........LOL 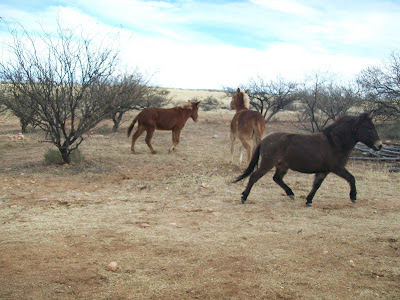 After a meet and great, Kris let them out of their pens.  He was so busy being nosy, he wasn't paying any attention, except when Pooh got closer than he wanted her, then he'd just move a little faster.  She'd gripe and kick up her heels, but seemed to be real careful to not actually make contact.  She was just showing him who's boss. 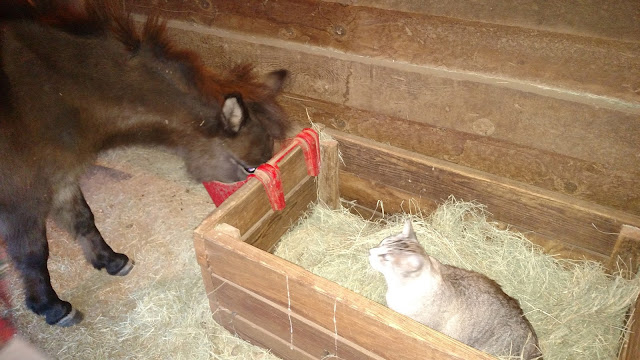 Kris sent this picture this morning.  I don't think he's use to having an observer while he's eating, but it doesn't seem to bother him.  Probably not as much as the cat was bothered when it came in from a day of doing cat stuff, and finding "this" in the barn.

Seemed to go well, they were talking about maybe getting a cart, which would be really good for him.  He needs a job to keep him busy.
Posted by Tish at 9:04 AM

His Head is almost bigger then his bucket. I hope he settles in and likes his new home, sounds like a fine place to live.

It looks like he's got his head buried as deep as he can to get whatever goodies Kris put in there. I just got a glowing report about him, I think he will do just fine.

Glad he has found a safe spot, and a mare that will keep him in line!!

Well, Pooh has her work cut out for her, since Gizmo basically ignores any effort to chastise him by anyone......!!! He just goes on his merry way, doing his thing.......LOL