Mesquite bean season is always a challenge.  None of our donkeys and Gizmo the mini mule need the sugar and starch.  But they don't care.  So it's always a battle, and we hope the beans run out before they can too much weight, or we have to put them in the pens under house arrest.

Yesterday morning Daisy didn't come in for breakfast.  We looked for her and she was down over on Burroland, acting like colic.  Got her up and walked her over to the pens.  I've had real good luck with Equine Colic Relief, USA for gas colic or something simple, so I gave her a dose and we watched her for awhile. 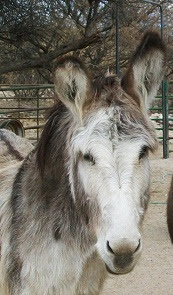 Vic a neighbor was cleaning pens, came in and said she was cast up against her shelter wall.  We got her up and I took her over to the sandy area everyone likes to dust bathe in and called the vet.  I've noticed that anytime a donkey gets sick it's on a week-end or holiday.  Guess mine aren't the only ones, Dr. Karla said we were her 4th emergency and it was only around noon.

She got here pretty quickly and went to work.  In fact, Doug came in and said the vet was here.  Our driveway announcer doesn't work when the temperature goes over 100.  We went out and she had already found Daisy and was working on her.  Did the usual colic treatment and we discussed Daisy's age and choices.  She is about 35 and hauling her somewhere for surgery would not be an option.  So we drugged her out for the day and she stayed on her feet all afternoon.

John checked on her when he got up this morning, and she's perky, hasn't drank any water or pooed.  Dr. Karla said to feed her lightly this morning, so we'll see how that goes.

So at feeding time last night, Doug comes in with the information that Cheyenne our smallest mini was laying down and wouldn't take a carrot........SIGH.....!! 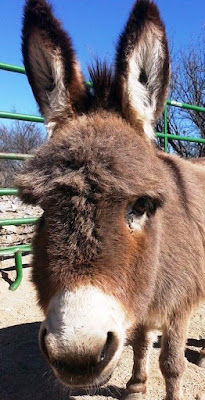 More Equine relief, well half a dose for a little girl, and in her pen for the night.  When John checked on her this morning she had eaten her supper of mush and he said she was not happy to have been in her pen all night long by herself, which is a good sign.  So he let her out to go find the others.

Cheyenne probably just had a little gas, but Daisy's is a little more serious.  They can't really tell what is going on in their intestines, except for surgery.  X-ray can't really pin-point the problem when you are dealing with 2 1/2 miles of gut unless it's something really traumatic.  Well that might be a little bit of an exaggeration, but there is a lot of gut wadded around in there, basically hanging loose to wiggle and squirm at will.  It's a wonder they don't have more problems than they do with bowel twists and ruptures.

So we can't have Daisy x-rayed.  Hopefully she will be interested in her breakfast and will poo soon afterwards.
Posted by Tish at 6:59 AM

Much impressed post.. I am really enjoyed it in a while. Keep sharing. Airport Advertising in Kanpur embraces the same devices and procedures of outdoor advertisements as sent at the shopping centers, metro stations and so on. In any case, these same instruments and procedures are utilized as a part of a more enhanced way at the airports.