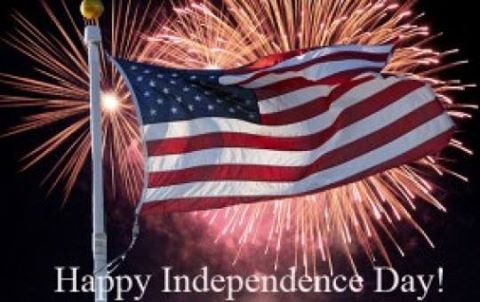 I read something a couple of days ago that said, "we don't celebrate the 4th of July, we celebrate Independence Day".  Hmmmm, never thought of it that way, but then again I was taught civics in school and have no problem knowing what the day stands for.

Jessie Watters was on TV interviewing what turned out to be college students from the University of Maryland at the beach.  He was asking them what the 4th of July meant.  Some of them actually knew it was Independence Day, but had no idea of the who, what, when, where and why.  That is very sad, that the future mothers, fathers, teachers, and leaders don't know the history of our nation.  Judging from the giggling and laughing, I wonder if they even care.

Saturday night I practiced on the chicane at the race track.  We only had about 6 laps and they ran us off to let the "real" race cars practice on the oval........!!!   Hopefully I learned something, because I will be racing this Saturday and it's suppose to be on the chicane.  I guess I'm having fun, not really sure........LOL

The donkeys are actually doing pretty good, considering the heat, humidity and all that goes with it.  Quilla seems to be walking a little better, but if it's an abscess it hasn't popped.

Yesterday morning everyone showed up, except for Frijolita.  This is very unusual, Frijolita really likes to eat and knows exactly when meals are served.  She also usually hangs with the "A" team, that consists of Tula, the Colonel, Frijolita the 1st Sargent, and the rest of the squad, Daisy, Quilla, BlackJack and Buddy.

Doug looked for her, then John looked for her and then John went out again, while Doug and I fed the others.  He showed up after we had fed and I had gone out on the 10 acres to check again.  We were pretty sure she was down somewhere and when they are down and the trees are leafed out, it's not easy to find them.  John finally came over from Burroland and said she was in the farthest corner, down and had been down for awhile.  No idea of what was wrong, but he finally got her to get up and she was favoring a rear leg.

When they can't walk, we usually feed and water them where they are, no sense in making them move.  So we got her hay, mush and a bucket of water gathered up and headed across the wash.  Low and behold, guess who had made it clear across Burroland...........and she was walking pretty good.  Got her in her pen, and for the most part that's where she's been ever since, by her choice, although this morning she is gone with the herd.  It will be interesting to see if she comes in for the afternoon feeding.

I checked her foot and there's nothing I can see.  Frijolita has string halt, which is a neurological condition and we were told she had probably eaten some noxious weeds of some kind before she was captured by the BLM at the age of 6 months.  It doesn't usually bother her unless she is in a hurry, so this is unusual.  I'm wondering if the hot, muggy, humid weather we are having right now if causing her problems?

Other than that still doctoring skin problems on 5 "patients" and seem to be keeping up pretty good.  So far nothing has gotten ahead of me and out of control.