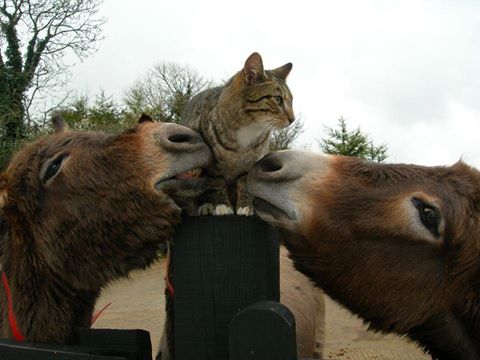 Yesterday we had a wind storm, nothing spectacular, just wind before a little bit of rain.  But it did tear up the tarp covering Rosie's pallet shelter and left much of the tarp shredded and hanging.  We didn't think it would be a problem, until John went out for afternoon round-up and caught GiGi, swallowing a piece about the size of a saucer and grabbing another piece and swallowing it before he could get to her.  So now we're on poo watch for the next 2-3 days, to make sure it comes thru the pipeline.  Why in the world would she eat it, it has no taste and I'm sure it doesn't smell like something good to eat.  The only thing I can figure out is, she liked the crackling sound it made as it went down her throat.

This morning John and Doug took down the rest of the tarp, and put up a new one.  They've never bothered it before, and Rosie is usually our "alternative" eater.  That's why the wood in their pen is covered with chicken wire.  So hopefully they will leave the new tarp alone.  We plan on putting roof paneling on, but right now it's just too hot to be out there if you don't have to be.

So tonight during round-up John noticed Boaz wasn't acting right, had water running out his nose with some green goop.  SIGH........!!!  He had been out on the property "self" feeding on mesquite leaves and beans, so it wasn't the usual pellets that he has problems with.  He didn't seem overly uncomfortable, so I opted to give him a shot of banamine and about 20 minutes later he seemed better.  I can only assume he gulped down too many leaves or beans and they got hung up somewhere, not too far down.

John and Doug continued round-up and John came in to tell me Quilla was acting funny................!!!  It's a good thing my hair is already grey I guess.  He was off, but nothing you can really put your finger on.  He wasn't interested in eating, had gut sounds, felt a little warm, but no temperature.  We discussed taking him for a trailer ride, which sometimes gets things like gas moving along, but it was almost dark.  So we opted for walking him around the driveway.  He was not impressed and actually tried to run away, which gave John a thrill.  He managed to keep up until Quilla gave up, but it was touch and go for awhile.  He finally dragged John back to his pen, so we let him go and have been checking on them both.

John just came in and said they are both eating.  Vets don't want them eating anything after they have choked for 12-24 hours.  As Dr. Karla said she likes them hungry and pissed......!!!  I've never had a problem with feeding them, I figure if it's a choke I can clear, it wasn't bad enough to upset their system by not feeding them.

I am very relieved, it's very upsetting when they aren't feeling good, and having 2 at the same time, so soon after Daisy is scary.