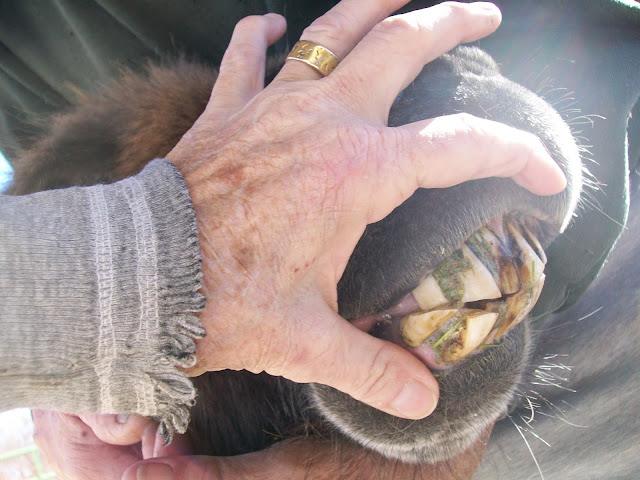 I didn't get as good a picture as I wanted of Lynn's mouth.  John had noticed she had a snaggle tooth.  Her mouth has always been a little creative, one of the results of breeding for smaller animals.  Her mouth has either too many teeth or too large of teeth, not exactly sure.  As someone with a small mouth and full size teeth, complete with wisdom teeth trying to break thru many years ago, she has my sympathy.  She has had teeth pulled which has allowed for some shuffling around and it looks like the cleanest one on the bottom closest to my thumb has lost the shuffle battle.  It's really loose, but not loose enough for me to have the guts to grab it with a pair of pliers and hopefully jerk it out with one "gentle" pull.  I've observed over the years that even though an equine tooth seems ready to come out, that isn't how it usually happens.  Poor Penny put up with about an hour of pulling and tugging to get one out.  Granted it wasn't loose to start with, because of her broken jaw it was not where it should be and was causing problems.

Dr. Debra doesn't come back until the 1st week of March, so Lynn is on the list and we'll keep an eye on it.  She doesn't like it messed with, hopefully it won't get infected between now and then.  Looks like she could use a good brushing, because her teeth are so crooked, they seem to collect food.