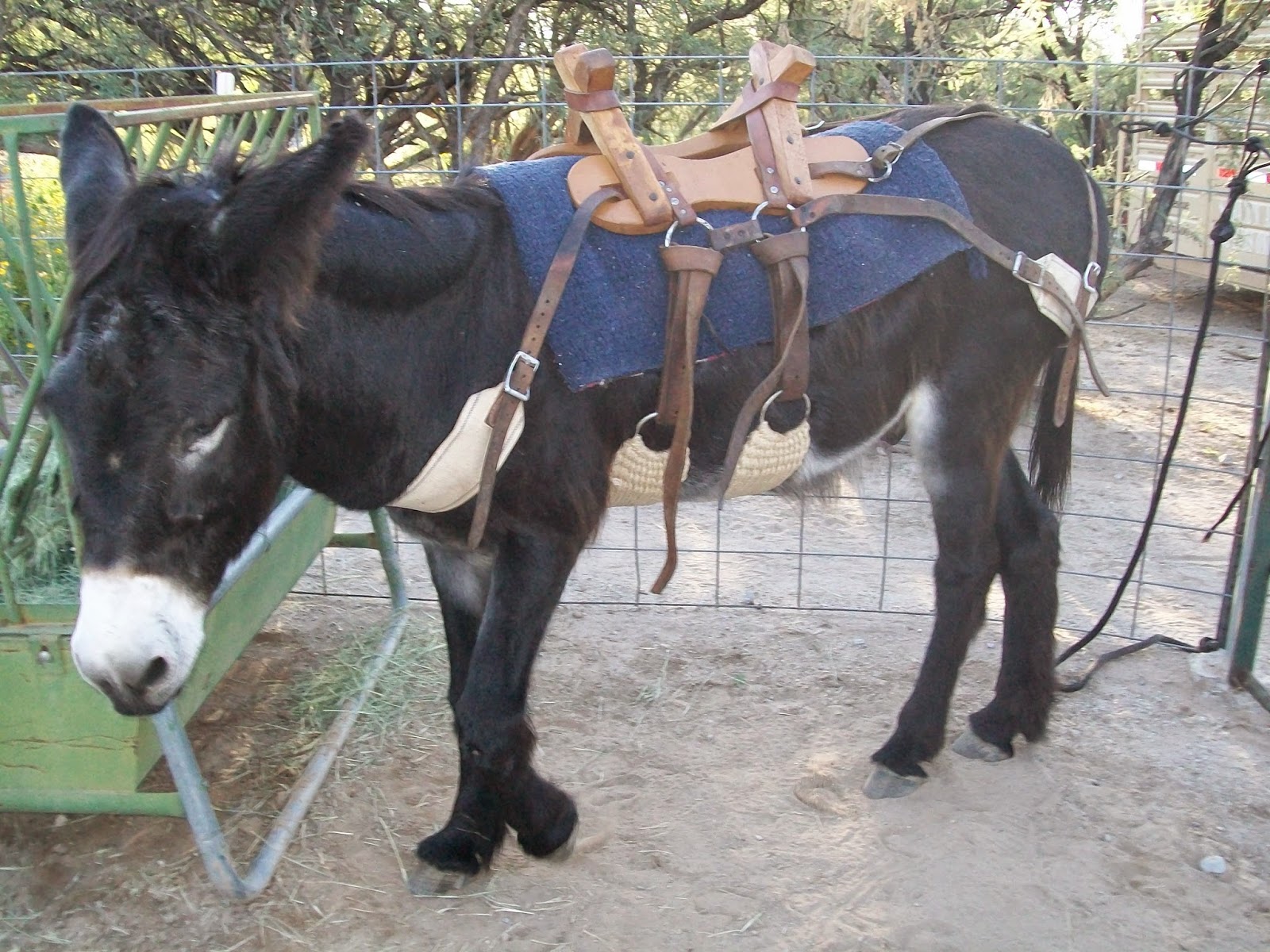 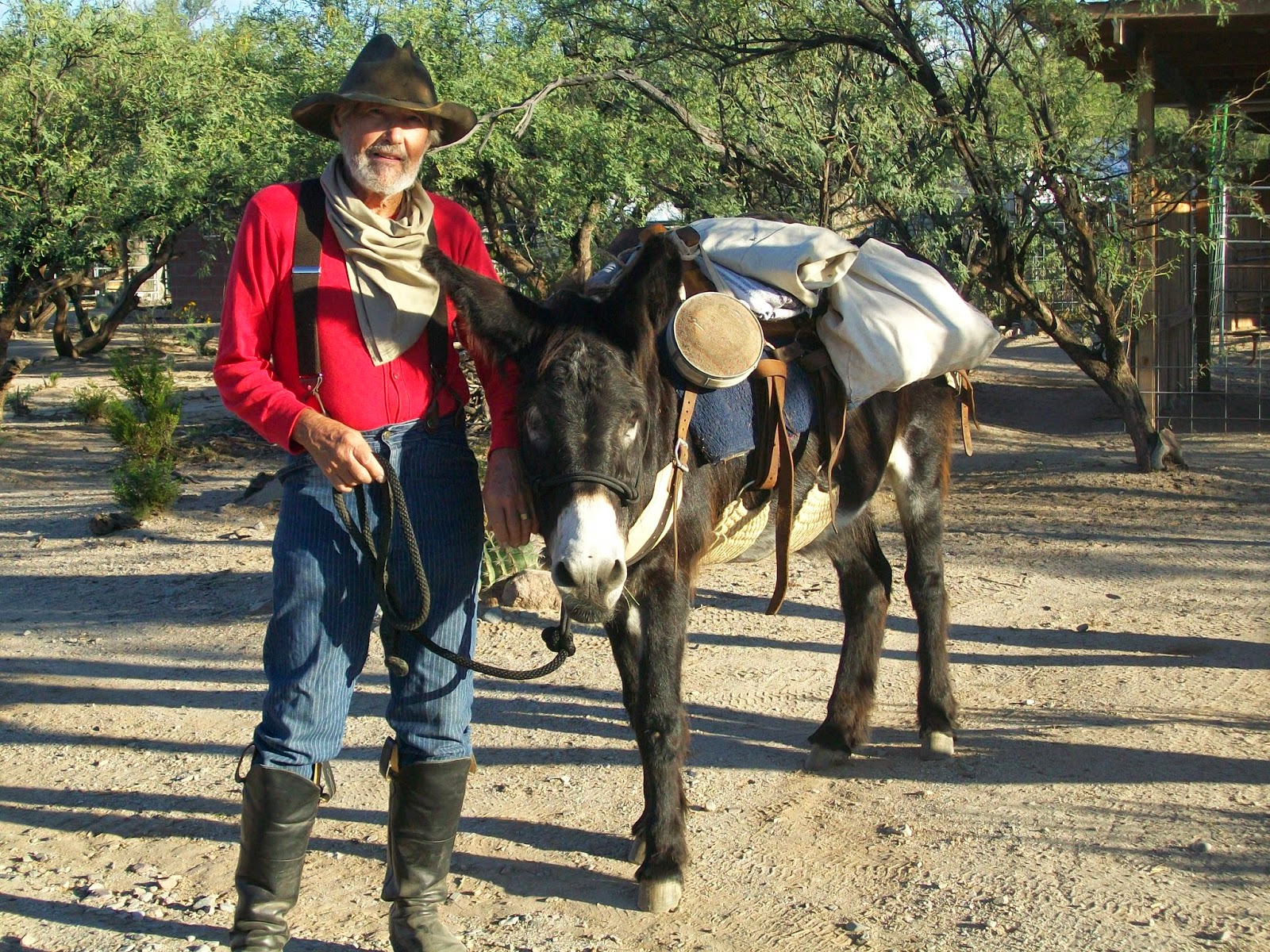 ALL DECKED OUT AND READY TO GO

Well at least John and the donkey's part.  This group have been real nice, started on time, even if it was early, did the miner and donkey part early and it's not even noon yet.  John just brought BlackJack home and went back over to have catered lunch and to bring Cisco home when lunch is over.  I still don't know exactly what they are doing,  when I took Cisco over after I did chores, there were a bunch of people in western dress, running out of the church. 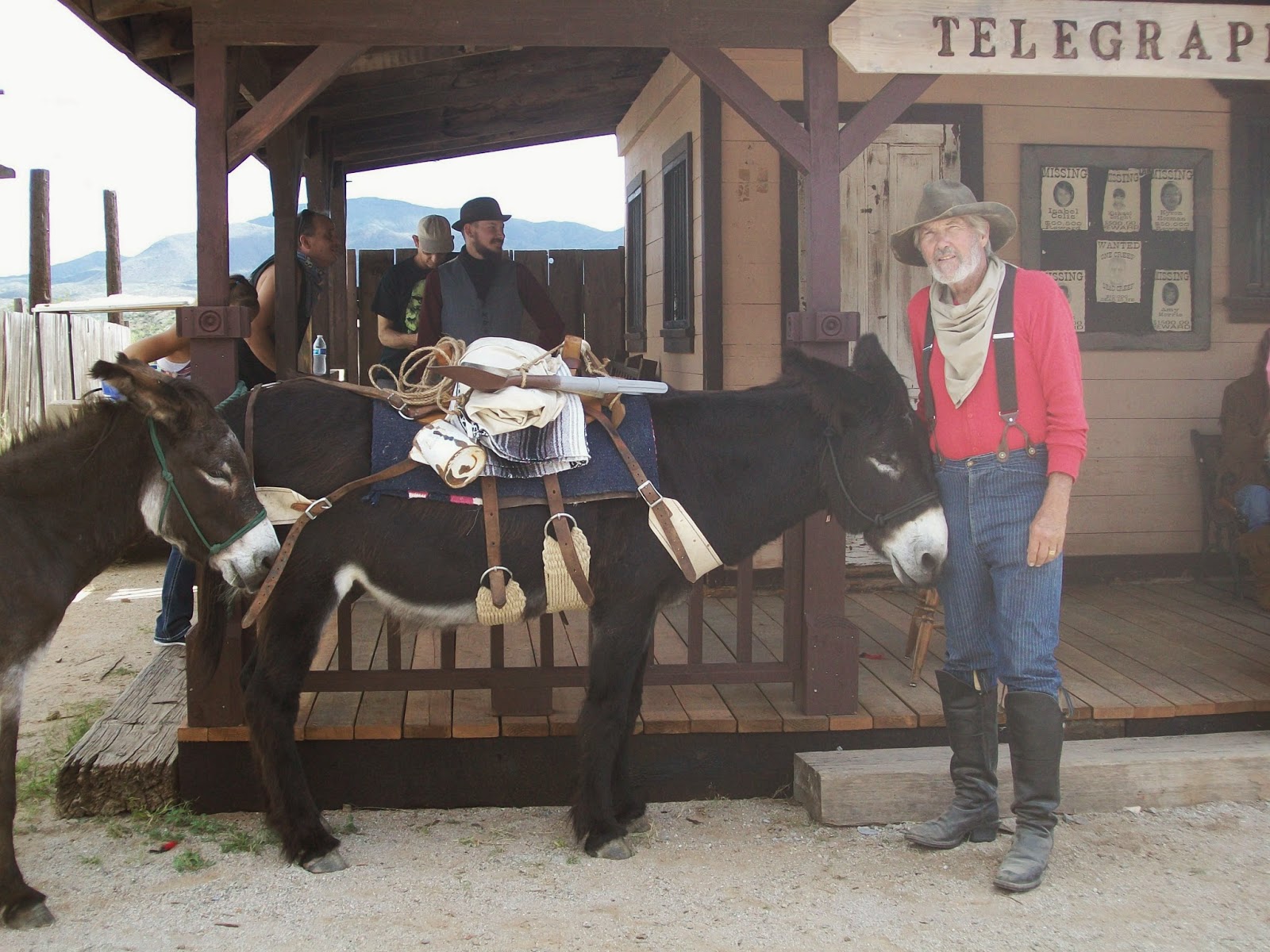 WAITING FOR SOMETHING TO HAPPEN

I was really impressed, when John and BJ came home I didn't know they were here until John came in the house.  He said he was going back over and I assumed he had left BJ tied at the feed room.  Imagine my surprise when I checked and BJ was wandering around and all the trappings were on the porch of the feed room.  Guess John was paying attention when I was bumbling thru putting the saddle on, at least enough to get it off.  I haven't checked yet to see if the straps and buckles were taken off on the left or right side.  For some reason John mentally, doesn't retain which side you work from on equines.  Thank goodness donkeys are really forgiving...............LOL

We went to watch our son run at the asphalt track in his modified last night.  He managed to finish the race, which sometimes is about the best you can do.  He is having "fun" getting the suspension set up.  Asphalt is not as forgiving as dirt when setting a car up, and to be competitive you have to get it right.  They have 2 more races before their season is over.  Hopefully over the winter he can get it figured out and have a good year next year.  He's actually in 6th place for end of the year points, so it hasn't been a total loss, even though it gets frustrating to go out there and not have the car set up properly.

I don't race again until the 11th of October.  I think we have 6 more race dates.  I've dropped to 3rd for end of the year points.  I've got a good chance to take back 2nd, but first is pretty much unattainable.  Catching fire last race night and not having a good finish, really put me down on points.  It was going to be almost impossible anyway, I told John I wish the 1st place car would not be able to start the main some night, that would really help my position......!!  LOL  He seemed to think I would jinx myself, if I thought of that.  So I guess I just won't tell him what I'm thinking until the season is over............LOL

John, all the guys in the band Dead Is He would like to express our sincere thank you for coming out and taking part in the filming of our music video "One creep, Dead creep". You, Blackjack and Cisco added that extra flare that brought that "1800's" realism to our video. Once the video is done we'll let know so you can view it.
The work that you and your wife are doing to help such beautiful animals is so commendable. We will spread the word of your sanctuary.
P.S. My son and daughter couldn't stop talking about how much they love Blackjack and Cisco and "can we pleeaassee... Get a donkey? Dad". I had to explain again how we live in the middle of Tucson and that it's just not the right place for a donkey. But I know they'll have lots to tell their friends at school today.

Once again on behalf of all the guys Thank you,
Michael Bright, Bassist - DEAD IS HE

What a nice thank you note. What kind of band is this?

We are a hardcore metal band , think Black Sabbath to the 10th power. Haha.

You're very welcome, we enjoyed doing it, and I think BlackJack and Cisco did too in their own ways, especially all the attention. Our work with the rescue is a labor of love and we find it very rewarding. You are welcome to come and visit with all the donkeys, we love to give tours and let people get to know these wonderful creatures. Children really enjoy the donkeys especially the little minis. We'll look forward to seeing the video once it's done. You all were great to work with.

Interesting picture on your FB for a donkey rescue.........LOL It is BlackJack Racing running the # 21, so I guess it is donkey related. Thanks

Thank you Michael. I hope this mention of the rescue in connection with the band will bring in donations.