RUGER IS BACK, PEPSI WAS CHASING THE DOGS WHEN WE LEFT

FOR ANYONE THAT CHECKED THIS ENTRY, THE REST OF THIS "STORY" COMPLETE WITH 2 PICTURES WAS HERE YESTERDAY.  I GUESS COMPUTER GREMLINS ATE IT.  I'LL TRY AGAIN.........!!!

Doug and his son Conor, came over this morning as planned to go on our adventure of the day.  We got a late start, which isn't all that unusual.  Feeding, doctoring, trying to chase why the lights aren't working properly on the trailer and pretty soon the morning is gone....!!!  Pepsi wasn't really sure he wanted to get in that trailer, at the same time we were having to fight off Justin, Wister and Molly.  Justin has always thought a trailer was a toy.  Finally Doug and Conor, literally picked Pepsi's rear end and pushed him into the trailer.  We're lucky he isn't a mammoth I guess......!!!!  LOL

Got there and they had a halter on Ruger and he was ready to meet and greet.  From the way they had described his independence and not being cooperative, we weren't really sure what to expect.  But he was his usual friendly curious self, just like I remembered him.

We just let Pepsi out in the yard, before meeting Pancho in the pasture.  Actually Pancho was off somewhere visiting with the neighbor's horses probably and wasn't even in sight.

Got Ruger lined up with the trailer and he pretty much self loaded, while Pepsi entertained the 3 family dogs.  Not sure the dogs were too thrilled, but he was having fun lowering his head and running at them.
Just about that time Pancho must have figured out something was going on, because here he came, running down the hill to the fence. 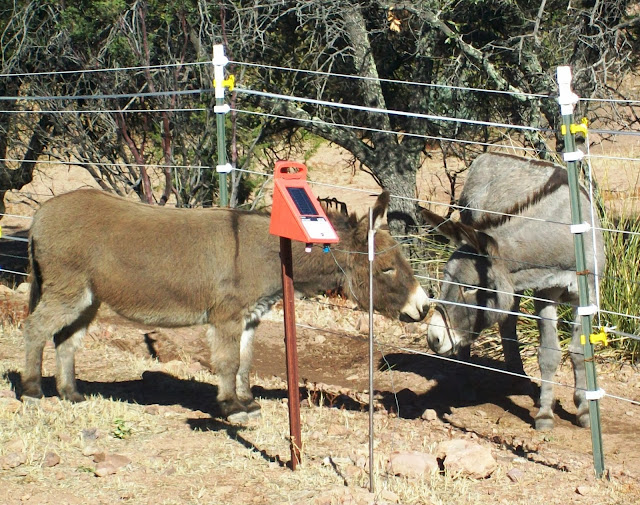 This is Pepsi and Pancho getting acquainted.....!!! 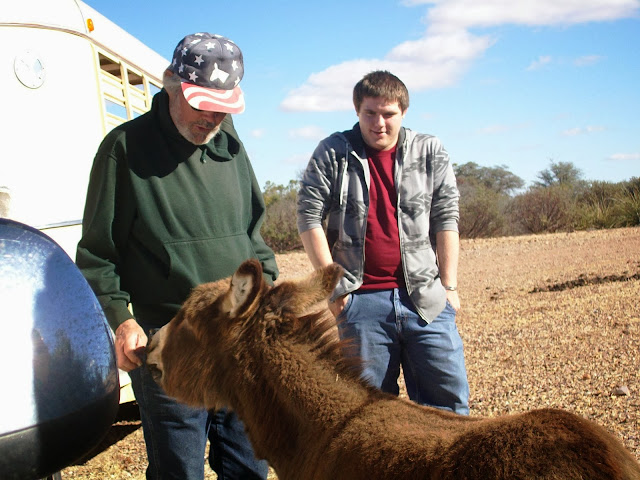 Right now Ruger is in a pen by himself.  We had to put Boaz in with Ruthie and Wister last night.  Our extra panels have been loaned out for about 6 months and we were hoping they would come back before we needed them..............NOT...!!!  We talked about feeding Quilla outside by the feed room.  But he really likes his pen.  We've tried in the past to feed BlackJack outside, but he is entirely too helpful when it comes to delivering hay to everyone.  This arrangement worked just fine, Boaz had his bunk and didn't bother Ruthie and Wister's.

We'll probably let Ruger out today, and the long term plan is to feed him and Wister together so they hopefully will bond.  They are full brothers, and would make a good couple to adopt out together.