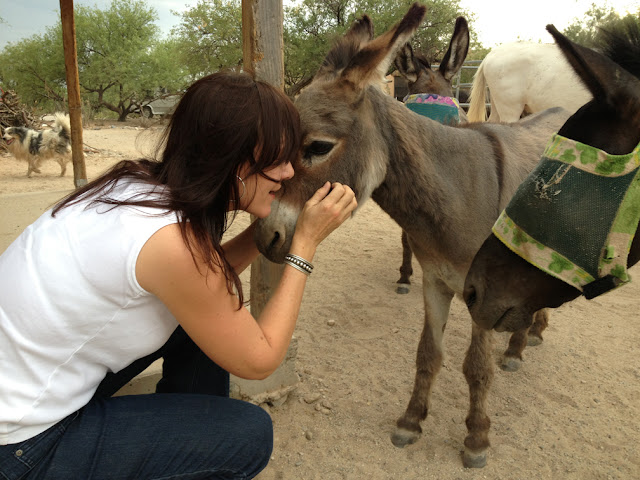 Cheyenne converting an admirer, thanks Jamie for the picture...!!

Rusty is on the mend, he's been kept in his pen the last few days to not only monitor his intake and out put, but to keep him away from the beans.

Yesterday morning Rusty had "puddin nose" on one side.  I called Dr. Megan had said call her if there was any changes, so I did even though it was Saturday.  She said start him on Tucoprim, and also said she had thought the "colic" was probably a secondary problem.  She had said his lungs sounded a little noisy, Friday when we took him into the clinic.

So he's been getting his Tucoprim mixed into applesauce, dumped into his mush.  I was going to just mix the Tucoprim into the mush, but for some reason he isn't eating it very well right now.  Loves his hay, but John had been "chumming" his bermuda hay with a little alfalfa.  Unfortunately the little bit of alfalfa hay we had is now gone, so he'll just have to eat bermuda.  Might let him out for an hour or so before afternoon round-up this afternoon, surely he won't be able to get into too much mischief in an hour.

Day before yesterday Jill's former Mom called after she got a letter I wrote her, questioning her surrendering Jill to us, without first asking.  I don't think she still sees that asking someone to take care of Jill until they find a new place to board her, and then sending a surrender letter a week later, is a little bit out of the "norm".  She said that when they won the bid for Jill at the local auction, Lisa one of the owners of the auction house came to them and said if they ever wanted to rehome Jill, she would be interested.  I told the woman there wasn't a problem with Jill staying here until we found a home for her, but if she wanted them involved, to have them call me.

Mike the other owner of Robertson Horse Sales called me and said they had someone that would give her a real good long term home that had been looking for a nice donkey like her.  We talked for awhile and I decided that this would probably be a good home for her, so John hooked up the trailer and we hauled her to them.  I told Mike that we wanted her to come back here if it didn't work out, and he agreed.  So we're again down to only 2 donkeys over our limit.........!!!

Seems like I spend more and more time every morning doctoring, mostly stable fly damage.  Poor Quilla has polo wraps on all 4 legs as of this morning.  I'd been keeping ahead of the stable flies on his rear legs, but noticed this morning they had battled thru my chemical barriers and drawn blood.  When it's humid it seems like the flies really are bad.  Penny's front legs are bare like Quilla's and at first I thought it was probably fly damage.  But the flies don't bother her at all hardly, although her legs are both scarred.   As "squirrely" as she was with her front legs, when she came, I have a sneaking suspicion someone has roped her front legs, because there are actual wound scars on her legs unlike Quilla's that are just bare.

Little Jack the mini mule is another one the flies or something seems to love.  He has round swollen places about the size of a dime all over his shoulders, and some on his belly, and of course the usual stable fly bites on his front legs.  Every year I buy 6 jars of Thuja Zinc Oxide to last me thru the summer, but this year I'm going to have to reorder it looks like.  Coquette also has some of the same stuff Jack has, and an added problem that seems to be some sort of skin condition.  It's dry, flaky, and builds up on her neck and behind her shoulders running down into her "armpit".  This morning I combed all the residual build up off and greased her up with zinc oxide.  It doesn't seem to bother her much if at all, but if you run your hands across it, the dry flaky stuff just flies.  Dr. Megan said we could do a scraping to find out what it is, but so far I've been able to keep it under control.  I can use that money to buy more zinc oxide.....!!! LOL  Same thing with whatever Cisco and Boaz  have on their legs.  I'm pretty sure what they have is called jack sores.

Although the experts lump jack sores, summer sores, & habronema all together as one, I'm not really sure they are.  I'm certainly no expert, but I can spot habronema larvae damage at 20 "paces", it looks like it looks.  What Cisco & Boaz have is an area covered with gooey serum, if you pull on the hair it comes right off the skin without leaving an open sore.  It's generally below the knee & above the fetlock, on the outside of the canon bone.  A couple of days of Underwood Horse Medicine and the hair starts coming back in and usually they don't have another break out in that area until the next year.  And what are the little closed circles that Jack the mini mule has?
Posted by Tish at 2:23 PM