Dental day is always "interesting",  & this time we knew we had some nasty mouths.  Both Reba & Penny have let us know their mouths had problems.  And of course we had others that had not been here the last time Bert came thru.

First of all I have to compliment all the mules & donkeys, they really did great, even Penny.  I had warned Bert that she is a fear kicker, but she didn't kick once.  She's really so much better than she was when we got her about a month ago. 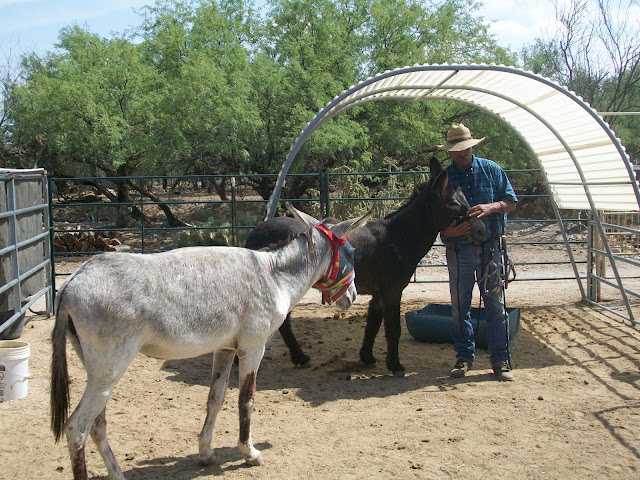 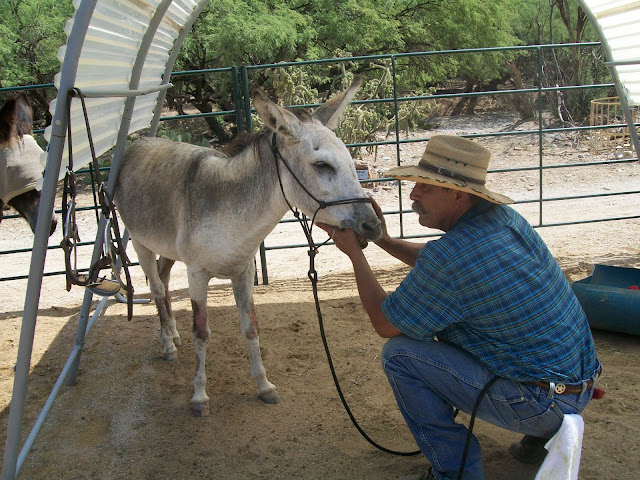 OOPS.....SHOULD HAVE DISAPPEARED WHEN SHE HAD THE CHANCE 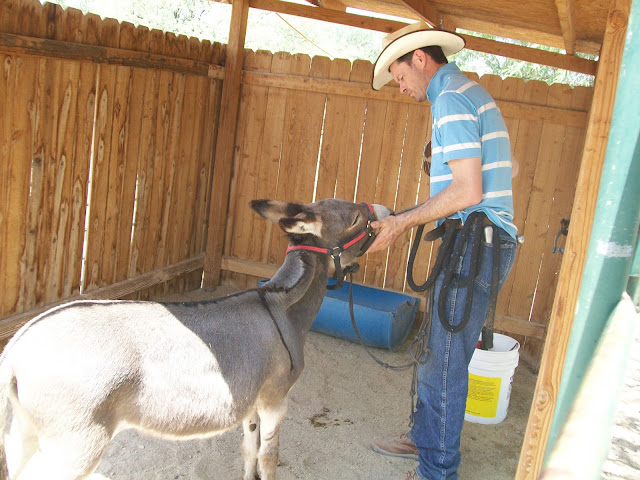 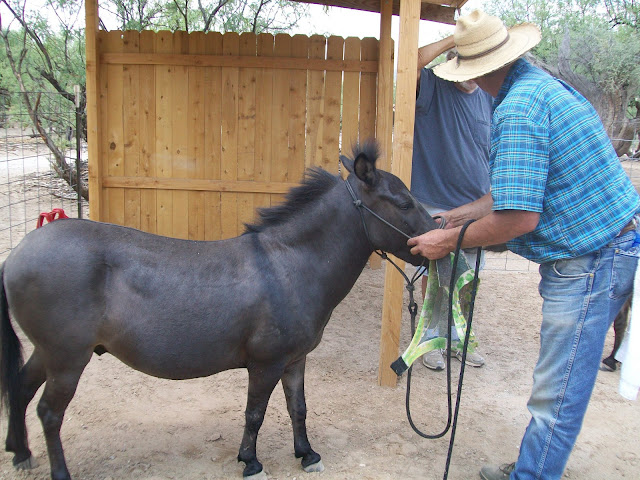 EVEN JACK BEHAVED HIMSELF

Out of 22 animals, only 5 needed work.  Tula was not checked because the only way you can work with her is to put her in the squeeze.  Then if she did need teeth work, the corral panels would be a real obstacle to try to work around.  Bert said the reason their teeth are in such good shape is because they are out here eating brush, mesquite beans, (Yes tiz the season we're starting to find a few beans here & there in poo)  & chewing on sticks & tree trunks.  So I would imagine her teeth are just fine.  And Wister won't need to be checked until he's about 15 months old Bert said.  His teeth are perfectly aligned, unlike Tucker's were.  Tucker had a significant overbite, although his molars all lined up like they were suppose to.  Don't know as he has gotten older if his lower jaw has grown longer or not.  I'll have to ask his Mom next time I talk to her.

Reba the big red mule had some nasty hooks & waves, Quilla needed a little bit of work.  Little Cheyenne, has been having trouble eating, even though her teeth had been done by a vet not long ago.  Two of her molars were enlarged & deformed.  Welcome to the world of minis, the smaller they breed them (she's only 32 inches tall) the more problems they have.  Simon took off some of the deformity so she can move food more easily around in her mouth.  The way it was, the teeth were up against the inside of her mouth & it was trapping the food.  That is probably why she has been turning her head in an odd way when she eats.

Lynn had some sharp points & then there was Penny.  I doubt if she has ever had her teeth done.  She had hooks & displaced teeth, ramps, steps, waves. almost a perfect example of all the things that can go wrong in an equine mouth.   Dr. Weaver had said her mouth smelled that she probably had some abscessed teeth.  Bert said the teeth were fine, but all the hooks had chewed into her cheeks & he could even feel the back of the hair follicles, it had eroded that deep & was infected, poor little girl.  Got her all cleaned up, so hopefully once the inside of her cheeks heals, she won't have anymore trouble.  I can't say she appreciated all the attention, but she really was pretty good.

Bert is a teacher in a equine dental school in Idaho, when he's not on the road.  He goes from Oregon to Texas on a circuit & has for years.  He said he spends about 2 weeks at home out of 2 months.  He doesn't ever tie them up & uses no drugs.  A lot of dentists work at with a vet & the vet automatically gives them drugs, whether they need it or not.  The animals all love Bert, he said he has a camel that is in love with him, that throws a fit as soon as he sees Bert..........how funny.

Some vets still float teeth & I assumed that when they are in vet school they might get a week or two of training on doing teeth.  Let's face it, vets learn a little bit about a lot of things in school, & probably don't spend a lot of time on any one subject.  I'm sure they are expected to fill in the blank spots of their education on their own as best they can.  Bert said they usually spend about 8 hours on dental, & that includes dogs, cats, equine, etc...........!!!  Wow....that's not much when you figure they are actually learning about different species in that 8 hours.

Some vets resent equine dentists, I guess they don't want the competition...........BUT.......... I would think there is enough work out there for all.  I certainly can't call a vet & have them show up immediately, whether it's for medical or dental, it's going to probably be days before I can get an appointment, unless it's an emergency.  So I don't understand the logic, they should appreciate the dentists & what they do, I'm sure some do, but some don't.
Posted by Tish at 2:52 PM

When Bert was hers some years ago, Plato tried to go home with him. When you see them work so well with difficult animals (Plato is my big, very unpredictable and certain the world is going to eat him gelding) you see who the true "horse whisperers are.

Equine dentists are becoming more available, which is great for the animals. They can suffer a long time with mouth problems & we don't even know it.

I am always amazed at how the animals react to Bert. He does have a gift, not to mention he tells a great story. He was telling us about roping a koala bear out of a tree in Australia. Said he immediately regretted it & it took quite awhile to get out of the situation.