Our morning started at 3:15AM yesterday.  First of all let me say, I'm not a morning person, at a decent hour, so this was really testing the waters......!!!  John got everyone rounded up, we fed, got Mother taken care of & hit the road by 5:30.

Met 3 other trailers in Tucson & up the road we headed for Buckeye, yippee, I finally found out where we were going.  I've noticed the older I get the less involved I get in "details", like "where are we going".  My position is, as long as one of the group knows what's going on, I'm probably better off not to clutter up my mind with unnecessary information.

We were in the 3rd slot & noticed pieces of tire flying around on the highway.  John commented on "hopefully it wasn't one of ours" 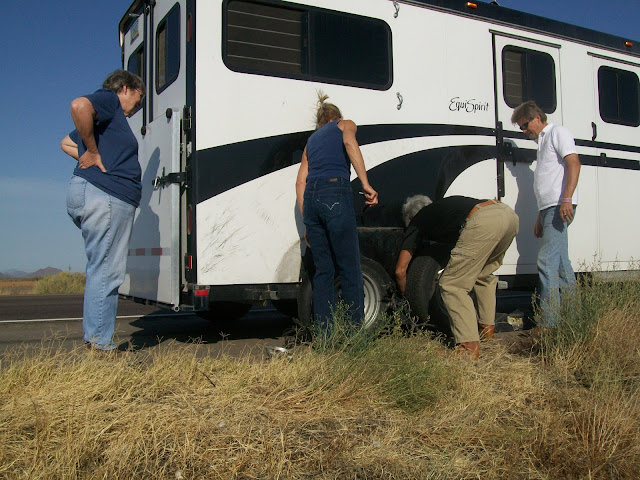 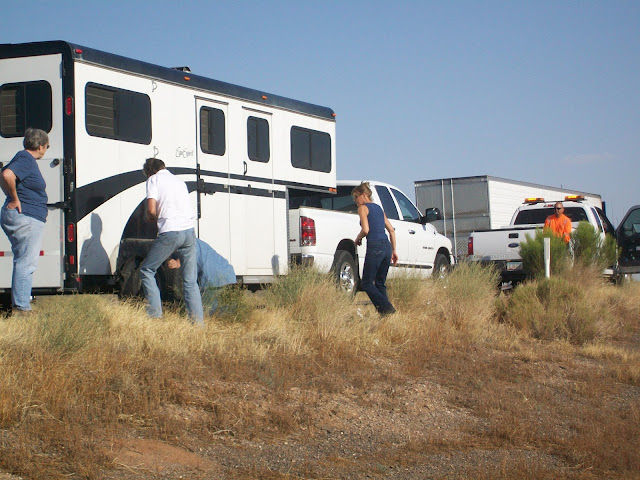 THE GUY IN THE ORANGE SHIRT IS ADOT RETURNING CAROL'S FENDER

We never even noticed the fender flying off, it's a wonder someone didn't run over it.  What is the chance of an ADOT guy coming by at just the right time, seeing the fender fly & being able to pick it up & return it, & it being in good shape?

So after a slight delay we were back on the road again, headed for Buckeye.  The place where the donkeys were being kept was right off the highway, so it was really a pretty easy trip.

Got there & Agriculture was there, running around with paperwork, & a bunch of donkeys in a couple of pens.  What this means is, they have not bothered to separate out the 17 that we were suppose to pick up.  I have become resigned to the fact that anytime you have to deal with bureaucrats, it's going to be a "learning" experience, & each time it takes me LESS time to learn all I need to know about the situation. 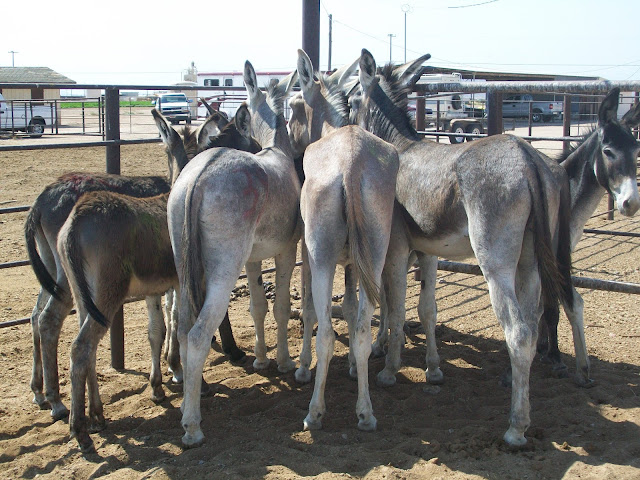 The group we were taking were pretty easy.  They were actually by themselves, so it was just a matter of getting the sorting pens & gates organized to get the donkeys to the back of the trailer.  There were 7, one fairly PG jenny, 3 jacks one older (probably poppa), a yearling & a weanling & 3 other jennies that are probably PG.  They  look like peas in a pod, all close to the same color, just different sizes.

I hate to have animals loaded by people that don't give a damn & Agriculture seemed bound & determined to show us how to do it.  Rather than take the time to let the donkeys look the trailer over & decide it wasn't going to eat them, the workers started yelling & rushing them & once they were to the back of the trailer, closed a gate on them.  One of the jennies was so scared she laid down & wouldn't get up.  They were all headed away from the trailer, & the workers were still pushing, shoving & hitting to get them to back into the trailer I guess. 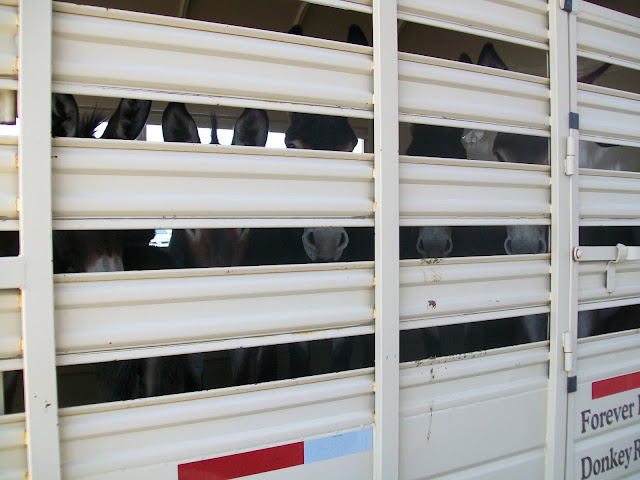 Finally one went in & the others pretty much followed.  Got the rest of the trailers loaded & we all headed for our destinations.  We originally were going to take them to Sonoita, but things change & we ended up taking them to Oro Valley, which actually was better for us. 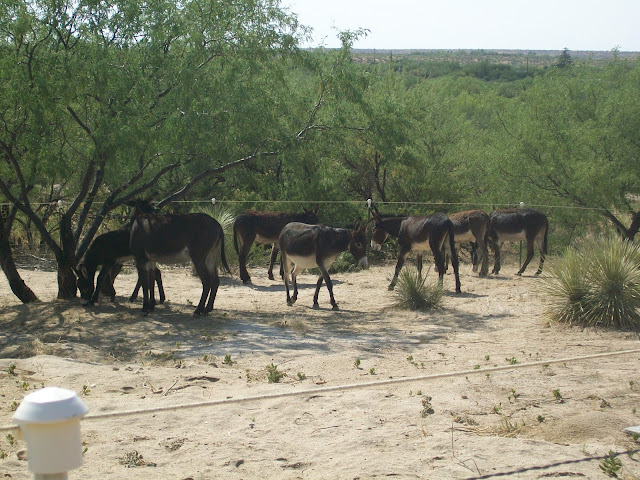 They came out & started exploring

This is a foster home, & should be a real good spot for them to get use to their life style change.  They are feral, in fact, if not all of the 90 donkeys were wild, it looked like most of them were.  Jo & Sam have never had donkeys, but seem willing to learn.  Not sure how much "gentling" they will get, 7 wild ones at once could be a little overwhelming for anyone.  But Jo & Sam seemed excited at the idea, & donkeys are usually willing to "go along to get along", so they should all have fun.

Bless you for caring -- and for putting your money and muscles where your mouth is. Maybe "next" time you can ask that the donkeys be penned up ahead of time. Obviously, it did not occur to them! Either that, or it was too much work.