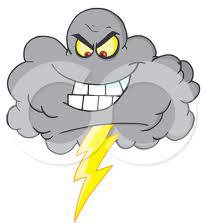 But so far we haven't gotten any rain, just wind, lightening & thunder......oh & about a dozen raindrops here & there.  There are areas around Benson, that had cars washed away in running washes & people having to be saved.

They got enough rain at the track yesterday, the races were cancelled last night.  We got a call from a friend that said the edge of the track was under water & the infield was pretty much covered with water.  Since that is where our little track is, I can't wait to see how they manage to get rid of all that water in time for us to race tonight.  Even though today is bright & sunny, that doesn't make the water magically disappear, it has no place to go, since it's low ground in the middle of a banked race track.

Nicki, one of our dogs is frantically afraid of thunder.  His answer to the problem is to run out the door when we try to go into the feed room.  We've told him going outside isn't going to make it better, & may only make it worse.  We use to wrestle him back into the feed room, but lately we've just ignored him.  It only takes one more clap of thunder to make him decide he wants back in the feed room.  Anubis the other dog pretty much looks at him like we do, as she lays on her bed in the feed room.

The donkeys usually don't react to loud thunder.  But they don't like to be rounded up in the middle of a "light" show.  They would rather hunker down with their butt turned to the weather.  John had his work cut out for him to get them into the pens.  This was all going on before we found out the races were cancelled, which if we had known we could have just left them alone until normal time to round them up.  By that time the storm was over.

Have you tried "Thunder Shirts" with Nicki? Or Rescue Remedy?

No I haven't, it seems we get so few thunderstorms, we're never prepared when they come & by the next one poor Nicki gets lost in the shuffle.