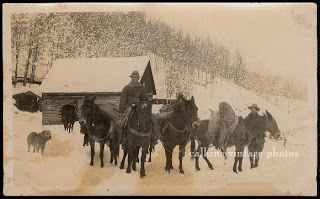 We got up early this morning to feed, so the old guys would have time to finish their breakfast, before we leave to go wrangle the jack. Our helpers should be here about 10, & we'll hit the road. John was out in the dark last night, moving corral panels from stock trailer to car trailer, & trying to organize 2 vans. We're trying to take anything we might possibly need, ropes, halters (like that's going to happen) & of course treats. That's probably not going to happen either. (G)

There is one little wrinkle, I will be driving the van with the car trailer & corral panels. I have gotten to my advanced age without very much trailer towing. John has "forced" me to drive with an empty trailer a few times, saying I need to know how in case of an emergency. Well this isn't an emergency, but it looks like it's time to upgrade my skills or lack thereof. At least I won't be hauling some poor animal. John tows great, I think you could put a glass of water on top the trailer & it would be there when he got to where he was going. I doubt that I have that skill, I'm more the bonsai type of driver............!!! (G) Maybe I shouldn't tell the helpers that are going to ride with me that I've never towed a trailer much before, what do you think? (G)
Posted by Tish at 8:02 AM