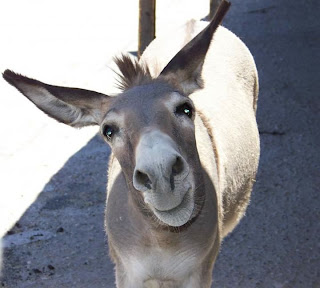 The dynamics are changing around here. Quilla is following Tula around like he thinks she might care & she looks like she's trying to escape, but it doesn't deter him at all. Oh! well he needs the exercise. He's lost the easy weight, so he's looking a lot better. But both he & Daisy have still got a long way to go. They both have large pones on their sides that might never go away. When he came here, we were told he was crippled & because of his club foot that had overgrown he was walking rather gingerly. But once that was trimmed, he moves just fine, keeps up with Tula when she is trying to get away from him.

Buster & Buddy Brat have been wrestling or fighting. I watched them for quite awhile last night & actually couldn't tell if it was play or real. Buster is really low key, so I'm sure it was play, but it got pretty rough, before I tried to break it up. All they did was run off behind the hay barn & continue the "battle".

Pepper the old buzzard, is still eating good, has put on some weight, & is walking much better than he was earlier this year, thank goodness. Last spring he really looked pathetic, a rack of bones & 3 legged lame. Two vets looked at him & without x-rays couldn't tell exactly where the problem was. The general opinion was he probably had been knocked down or been smashed into a gate & cracked his scrawny hip bone. If that is what happened, I assume it has healed as well as possible. He doesn't have full range of motion, but he toddles along at his old man's gait & gets where he wants to go pretty quick.

For awhile he was eating mush, but over the summer he started eating hay again, & now eats very little mush. The problem is, his teeth aren't good enough to chew up hay, even short stem. But obviously he's getting some food value out of it, because except for his protruding hip bones, he looks pretty good. Both he & Sha'ba will get their "blankies" every night when it starts getting down in the 40's at night.

Next week the dynamics are really going to change when we bring the new guy on the property. I'm sure the girls will think he's an answer to their prayers. I just hope we can get him in the trailer without traumatizing him. From what May had told me, he's not particularly spookie or anti-person. So hopefully he will fairly easy to socialize. Of course if someone forced me in a trailer, left me there all night, didn't feed me the next morning, & someone else came along, put me to sleep & when I woke up found out what had been done to me, I don't think I'd be very social, would you........!!! (G)
Posted by Tish at 7:37 AM