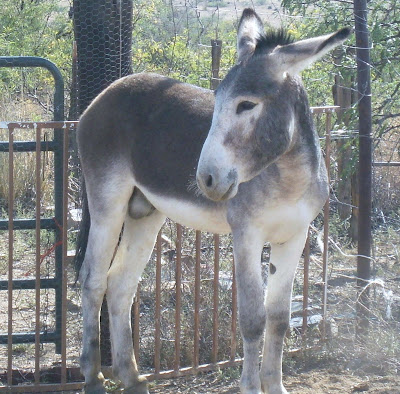 He seems to be doing just fine. He has some swelling, not bad it doesn't seem to bother him. very much. This morning our resident "hussy" Jenny was trying to entice him thru the corral panels. He seemed to think it would be a good idea, & we had a hard time getting her to leave the area & go in her pen to eat. Jenny always welcomes the new boys, & they usually think she's pretty cute. Quilla was very smitten when he came, & even now he is usually with the girls more than the other geldings. He seems to like all the girls, well except for Daisy, they still don't like each other, although their tolerance level has improved.

We've been letting him into the other pens, to give him a chance to move around & get use to the place. Rusty & BlackJack really get upset about him being able to go into Jack's pen. His pen is usually prime real estate, for cleaning up hay. They both know it & they guard the gates to make sure they are in first, when Jack goes out. I thought BlackJack was going to tear the gate off the hinges, when he figured out he wasn't getting in.

Courtney sent me some information today on different types of slow feeders. This is a great way to feed equine that have a problem with weight, or might be insulin resistant. Equines aren't meant to eat 2 or 3 times a day, they are grazers or browsers & should eat constantly, but tiny amounts. Except for my 3 oldest guys, this should work. They say even "piggies" can be fed this way, because they lose the "mealtime" crazies.
Posted by Tish at 3:59 PM