Heard from May this morning & it looks like I will call the vet Monday morning & set up an appointment for the jack's "brain" surgery. Once we know which day the vet can come out, we will go over & get him in the trailer the day before. May said he is comfortable eating in the pen & doesn't mind her being in there with him. It sounds like he might not be wild, just not worked with. Hopefully..........!!!!!

We have a friend that has offered to go with us, if we need more "wranglers". Joe was the one that wrangled Fred the pot bellied pig for us a couple of years ago. He's big & strong & was raised on a farm, all things we aren't............!!! (G) The pen is large enough that John & I couldn't control it by ourselves. We will take corral panels with us to build a chute to aim him towards the trailer, but he probably will look at this as a very suspicious situation & not anything he wants to do.

This morning I wrapped Quilla's front legs with honey, cotton & vet wrap. After doing good for so long for some reason both front legs developed bloody sores again. I had changed over from the thunja zinc oxide to using Equaide because it dries rather than being gooey like the zinc oxide. Unfortunately it didn't do the job, & rather than seeing if the zinc oxide would work, I decided to just go back to square one & start over.

Yesterday Frijolita was limping around. I checked her over & she didn't want her fetlock squeezed. But today she's walking normally so I guess she just stepped wrong. Easy to do especially ove 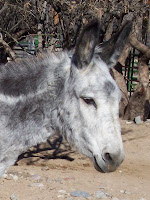 r in Burroland, where they head as soon as John lets them out at bedtime. Old lounge lizard Pepper is usually the 1st one to the gate. He can just barely walk, I don't know how he gets there so fast. This morning he was posturing at BlackJack, which isn't a real good idea. BJ could knock Pepper over & not even know it. No fool like an old fool I guess........!!!!! I wonder what he was like when he was young. If his personality was anything like it is now, he was a handful.
Posted by Tish at 1:07 PM