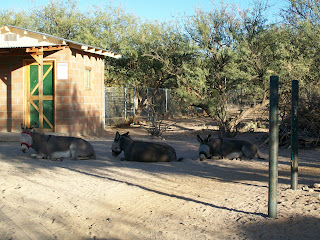 It looks like we will be picking up the jack next Tuesday & the vet will come out Wednesday to do his "brain" surgery. The vet is going to bring a cowboy friend with her in case we need some expertise. She thinks we might be able to snub him up to the side of the trailer & give him a shot in the neck vein, rather than use the dart gun. But, just in case she's bringing the gun.......!!!

I talked to May tonight & she said he seems just fine with being in the pen to eat, in fact she is feeding him in a shed & he is fine with that. I think instead of being wild, meaning frantic fighting to get away, he is probably just unhandled, which makes him cautious to new experiences in his life. I hope when we drive in with a truck & stock trailer he doesn't decide to panic. Joe & Julie his wife are going with us, which is great. Like I told the vet yesterday, John & I don't mind getting into the fray, but we're too old to be very useful if speed & agility is needed. (G)

I took the "honey" bandages off Quilla yesterday morning. Just like before all the sores were gone after 2 days of being wrapped. I've read up some more on using honey on wounds & it seems like up until WWII i.e. the advent of antibiotics such as penicillin, honey & turpentine were widely used. Farmers use to keep honey & turpentine in their barn in case they needed it for them or their animals. I don't think turpentine would feel very good in a wound for man or beast quite frankly. When I was a kid I remember Merthiolate & that was bad enough. Do they even sell that particular type of torture anymore?
Posted by Tish at 7:39 PM