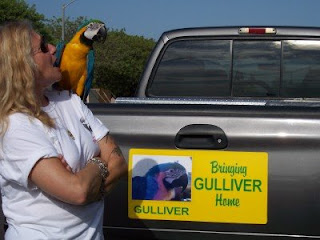 I got back about 2:30 this morning from the San Diego area. Gulliver was in 30 days of quarentine before he could return to the U.S. from a shipwreck in December. The isolette he was kept in was 2 feet square. Since he was over 2 1/2 feet long from beak to end of tail feathers, it had to be a tramatic experience for him. He was so stressed the first day, he was in constant motion & it was very difficult to interact with him. Sybil didn't want to put him into a cage of any kind after his experience, so we kept him on our shoulders or arms constantly. We took him to the beach, to a Mexican restaurant & on Saturday there was a picnic held in his honor in a park. His behavior improved every day & he's really a sweet little guy. Unfortunately, being crammed into a too small box for 30 days just about drove him crazy.

It was really a fun trip, a type of "girl's road trip". I checked in with John once a day to see how things were going. He had no crisis' which was great. Of course today, both Jenny & old Pepper are favoring a front leg. I can't find anything wrong with either of them, so I'm not exactly sure what the problem is.

Everyone else seems to be doing just fine. Although I'm afraid Chili is going to be going into a pen for awhile. He is plumping up nicely right now with all the mesquite beans available.

Chester is go back on antibiotics tomorrow. John doesn't "do" shots, so Chester's been off antibiotics for 6 days. He's walking pretty good, but looks like he's slipped a little. I don't know if it's just normal for him, or if there are pockets of infection that are raising their ugly heads.

John relented on keeping Tula in the pens while I was gone, which wasn't a big surprise to me. She only had to stay in one day. Not that she was very cooperative, but I guess John decided his time wasn't that important after all.