EVERY DAY IS A LEARNING EXPERIENCE

Snowy seems to be doing better today. We ran a list of things that could be wrong with her, ranging from ulcers to perhaps being at the end of her life. She is probably in her 30's, has 3 teeth, crippling arthritis, & of course being a holiday makes if difficult to find an available Vet. We managed to get her to eat a little yesterday. John & I also tried giving her pro-biotics in case there was a problem with her digestive system. Well, she might be old, & she might not feel very good, but she managed to lead us a merry chase within the confines of her pen, & defy us to stick that stuff in her mouth. I mixed it in with some of her soaked beet pulp & timothy pellets & she ate it, so it must not taste bad. I think it was just the idea of us trying to make her take it. She regularly clamps her lips together to refuse a carrot or apple treats, & we've never been able to figure out why, unless it's to prove she can.

We think she might have gotten too cold the other night & maybe that was the problem. It was warmer last night & today was pretty nice, once the fog lifted. Not what you expect in the desert............!!!! At least not what I expect. She went out of her pen this afternoon, & seemed to follow her regular routine, so hopefully she's OK. I checked my records & she had a similar experience last April but it only lasted a day.

We also had the equine dentist out today to check Belle. Belle had a lump on her jaw when she came to us this summer. We were told the lump had been checked by a vet & they had been told to leave it alone, & just watch it for any changes.

A few days ago, we noticed her pushing against it on the side of the hay bunk when she was eating. Checked it out & instead of being solid like before, it was now loose & you could hear & feel it grating on bone.

Phil checked her jaw inside & out, & agreed it was very strange. He massaged & pushed on it from the outside & all of a sudden something fell out of her mouth. This is a picture of the rock that had been encapsulated in a pocket on her jaw. The quarter & 2 dimes show the size of the 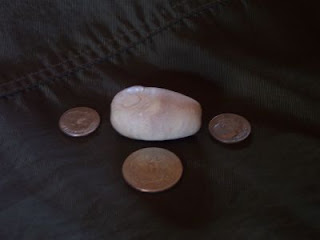 rock & it is about as round as a man's thumb. It is very smooth, like a rock that has been in a lapidary tumbler, so we assume it has been in there for a long time. But how did it encapsulate like that? Was it sharp enough to puncture the inside of her mouth when it got caught in her mouth? How did it get caught in such a way, so that it couldn't just fall out? Lots of questions & no answers.