Saturday was a nice day, we had people coming in a few at a time all day to visit with the donkeys.  Sunday was a little cloudy and cooler, so we had less people coming in to visit with the donkeys.  I think we all had a good time, and everyone that came left with a smile on their face, although a couple of women got their fingers in the wrong place and got bit.  We tell visitors how to feed the donkeys, and almost all the donkeys are very careful when taking something out of hands.  Obviously a couple of them need some remedial training.......!!!


Balloons to get people attention as they drive down the road.  I don't know how many times people coming out to see the donkeys say they drove right past the road to our place in spite of the sign.  Lynn was creative about putting up the balloons, usually out here people just tie 3 or 4 balloons in a bunch.  This was nice, it even looks like he evenly spaced them.

All neat and tidy, seemed like everyone had been cleaning and organizing for days. 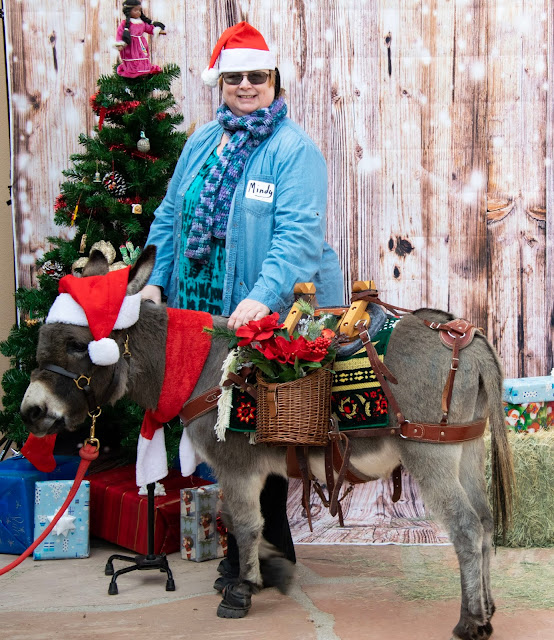 Mindy and her mom came down from the Phoenix area to help with the Open House.  Mindy comes down a couple of times a year to get her "donkey fix".  She really enjoys being with the donkeys. 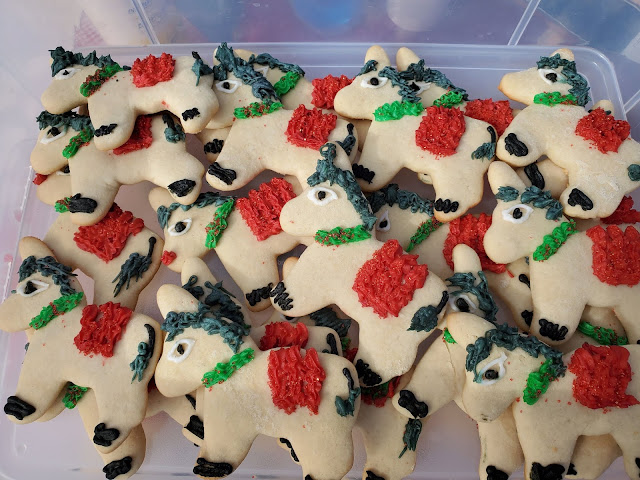 And she brought cookies, she made them from her mom's recipe and they not only look good they were really tasty. 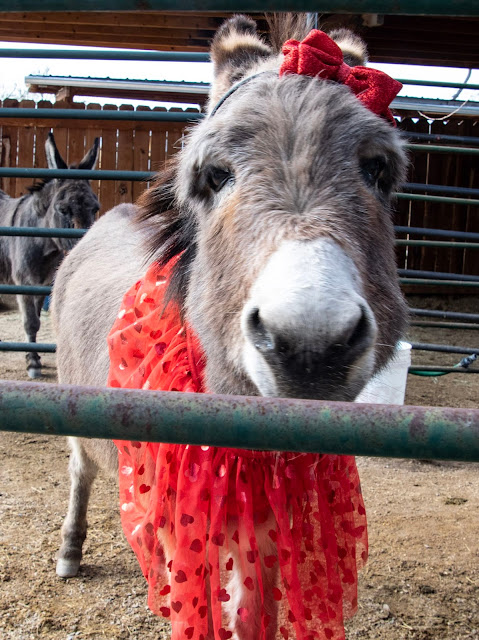 Cheyenne doesn't mind dressing up, but didn't want to be the photo donkey.  So Justin had to step in and save the day. 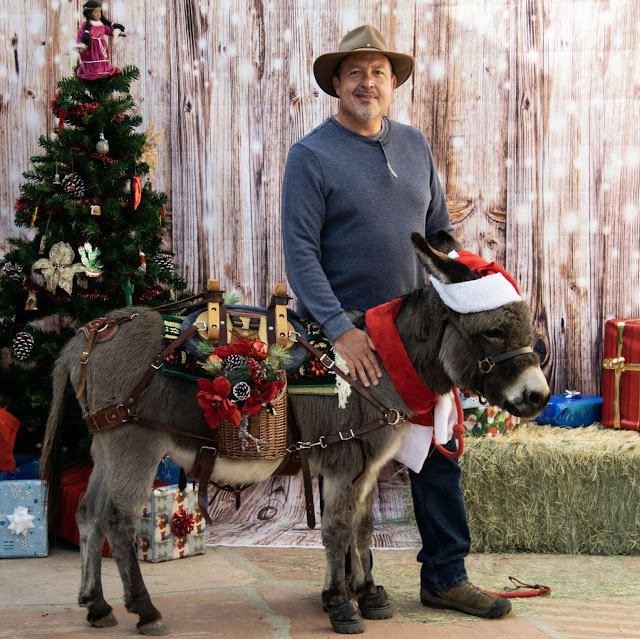 This is Justin, with, John one of the volunteers.  We weren't overly busy either day, but we couldn't have done it without the people that came out to help.  Evie from Fuzzy Focus took pictures on Saturday, we really appreciate all the really neat photos she took. 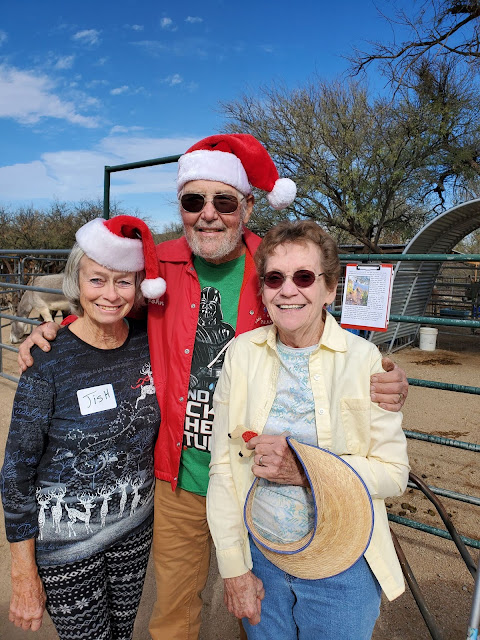 I was sitting at the entrance table and who walks up but a dear friend of over 50 years.  In fact Ellyn was our bridesmaid, when we got married over 58 years ago.  She still lives in Missouri and winters in this area in the winter.  For about the last 4 years she has threatened to come and see us while she is out here, but you know how life gets in the way of plans a lot of times.  But she made it this year, we were glad to see her even if it was a short visit.

Tonight there are 11 horses on the property.........!!  They are shooting a movie called The Righteous Twelve, up at Gammon's Gulch, the little movie site just east of us on the road to our place.  A couple of weeks ago the director came down and asked if they could keep their horses on our property, for the week that they will be shooting.  He even wants John and BlackJack in their mining outfits to be in the movie.

Over the years John and some of the donkeys have been in 2 or 3 movies or videos up there.  Believe me movie making isn't near as glamorous as the end product.  It's a lot of waiting around for your part and then doing it over and over, until they are satisfied with the results.  I guess if you are a big star, and have a RV or something to go hide in until it's time for you to show up, it's not so bad.  Nothing John has been in, has had enough budget to furnish a RV for the star.......LOL  They don't mingle with the extras like John though, so don't know where they hide out.

When they came in with the 1st load of horses this afternoon, they had to deal with Big Gus, he is bound and determined they need his help to get settled in, the people that is.......!!  Linda, Suzanne and I were in the house and we watched one of the guys trying to get away from Big Gus.  He was roaming around by the house, trying to escape Big Gus and Gus was having a great time keeping up with him.  Should be a very interesting week, because the donkeys are loose on the property.  And being the nosy critters they are, they will want to "help" the movie people do whatever it is they are doing, whenever they are doing it, whether they want the help or not.

We have 2 parades before Christmas to walk in.  They are both at night, so all the donkeys will be lite with strings of lights.  BlackJack is the only one that has done a nighttime parade with lights, so it should be interesting hopefully it won't be a big deal to some of the donkeys.  They usually are willing to go along to get along.
Posted by Tish at 7:25 PM