Yesterday Lynn and Linda spent quite a bit of time with the new guy.  As you will see in the videos he's a lover.  Emily said he liked to be scratched, that seems to be an understatement......!!! LOL  I know every time I walk past his pen, he comes over and lines up next to the corral panel, so I can start at his withers and scratch all the way down his back. He is very personable and really enjoys attention.

This morning after he finished breakfast we let him out for about an hour by himself, so he could learn the property, without nosy noses in his business. 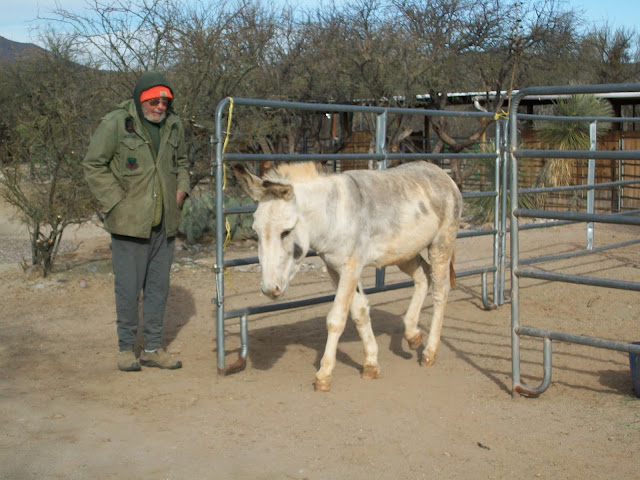 Headed out for a day of adventure.  He just wandered out when the gate was opened, and even after we let the others out, he was really mellow, even if some of them weren't...........!!

Early in his outing when the others went out, some of the guys took turns chasing him.  But it was in play and he seemed to take it all in stride.  At least with the guys.

Tula who is the head jenny, let him know in no uncertain terms that if he had any ideas about being in charge to get rid of them.  It didn't seem to upset him and after running at him a couple of times she just ignored him.

Bunny is still behaving like a good girl gone bad..........!!!  Today she, Lobo and Legend stayed in the Burro Barracks, tonight they will get out and Cochise will stay in his pen.  If all goes well, tomorrow they will all be out together.  Cochise was only gelded a couple of weeks ago.  He shouldn't still be able to be a daddy if he fell to her charms, but stranger things have happened.  The way it was explained to to me it wouldn't be impossible, but highly unlikely.  She's been chasing him ever since he got here, and he's very interested in her, so who knows what will happen when they get on the same side of the fence.............LOL

This week-end we will be taking most of the donkeys to one of the local RV parks for a night time parade thru the park.  A few years ago we were invited to do the parade with BlackJack as the Grand Marshall.  It was just BJ, John and I, this time there's going to be about a dozen donkeys with their walkers.  Should be a lot of fun, most of the walkers live in the park.

That's the last parade on our schedule, but New Year's Day there will be a 5 kilometer race out here.  Some of the runners will camp out the night before, so it's probably going to end up like a big sleep over..........!!

I think he wants to be a lap donkey. He sure is loving and does love his scratches.

He'd get in your lap if he could figure out the logistics........LOL