The 2nd fuel pump came in, John put it in.  The difference between 10 pounds of fuel pressure and 50 pounds is really noticeable..........!!!!  I think a lot of the problems I've had on the track lately probably could be blamed on the fuel pressure.  Guess I'll find out tonight. 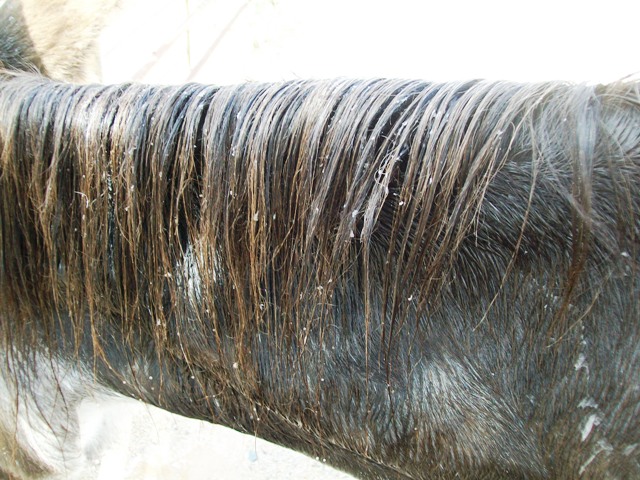 Poor Cisco has skin problems every summer, not always the same.  This year instead of having bloody open sores, we've been dealing with what I thought was dry skin.  When I'd brush him all this flaky stuff larger than dandruff would fly everywhere.  Yesterday I gave him a bath in special shampoo and this is what he looked like after his bath.  The 2 light colored areas are sunlight or something else.  I brushed and rinsed and rinsed some more and brushed some more until I figured out I wasn't going to get rid of it in one bath.  The flakes in his mane (yes, unlike most donkeys he actually has a long mane rather than an upright roached mane)  just kept coming out the more I brushed.  The lines in the bottom right hand corner are actually pieces of skin.  I assume these larger pieces are what it looks like under his hair and they get broke up into the smaller pieces.

This morning he's got a larger area of larger pieces of dried skin.  You can pull them off an inch or larger pieces.  There is no sores, or scabs, he's just sloughing off the top layer of his skin, it's very thin, I'm assuming it is the top layer of the epidermis named the stratum corneum.  Who knew there was 5 layers of epidermis.........???   I sure didn't.  If my teachers had taught things like that I might have been a better student.  LOL 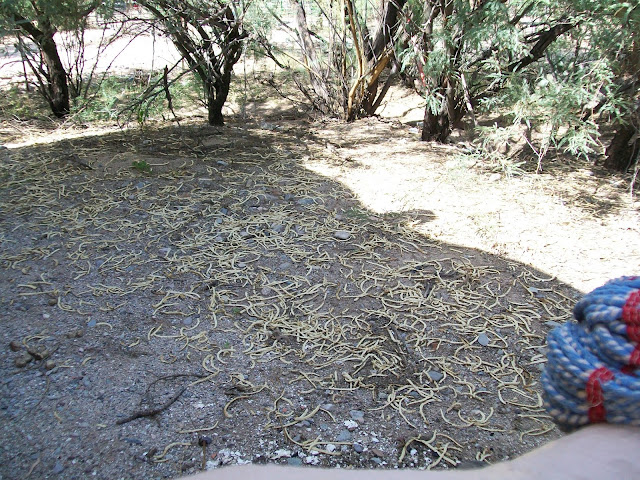 It doesn't look like they are going anywhere for awhile.  We did open the gate into Burroland that comes off the road, so if the cows would like to go in they can.  I don't know why they would, there are beans laying along all the roads, anywhere there are mesquite trees, which is EVERYWHERE.
Posted by Tish at 1:13 PM