This is going to get ugly I'm afraid.  Today I decided to lower their timeout to two hours a day, out at 3pm, in at 5pm.  They weren't too bad about coming in, which was a surprise.  BUT......Penny came in choked.  We've been working with her for the last 3 hours and I think she is cleared, but she is so stoic, even more so than the other donkeys and they are bad enough.

I've been in touch with Dr. Jeremy, he's actually treating a colic right now.  She brayed at me and I asked him is they can bray when they are choked and he said they can.....!!  I was hoping that was a good sign.

Whether she clears on her own or not, they have got to stay in, otherwise we are just playing Russian Roulette.  Big Gus has been in his pen the last four days and has started trying to get the gate off it's hinges.  Today Casper was trying to take his pen apart.  Our corrals are not very sturdy, but it's never been a problem because they are usually only in to eat.  After being in there a day or two full time, I have a feeling they all will get a little creative.

So John and Suzanne are going to start trying to outwit the donkeys.  John's got some T-posts to pound in the ground beside the corral panels and make it more difficult for the donkeys to scoot the panels around .  Some of them know how to play with the chains, so we'll probably have to get some more clips to hopefully keep them from opening the gates.

Tomorrow we are suppose to take 4 of the donkeys, well 3 donkeys and Casper the mini mule monster to get their teeth looked at and maybe floated.  We were suppose to take Big Gus, but since he just got tubed and all that a few days ago, he got removed from the list and we put Cheyenne in his place.  Dr. Debra use to practice down here, she moved north of Phoenix a few years ago, but still comes down here once a month to do teeth.

Last month one of the local papers did an article about my racing.  I got a call from one of the churches to come and talk at one of their potlucks they have each month and they said bring John along.  So this afternoon John and I got to be local celebrities.

I'm not a public speaker although I can talk and talk and talk as anyone that knows me personally will attest to...........LOL  I made a few notes, made up a storyboard with pictures of racing and also of the rescue and off we went.

Had no idea what to expect, but they all were so welcoming and gracious and seemed to enjoy my little talk.  But first we got to enjoy the potluck, and what a spread they had, everything was delicious and plenty of it.  I guess they do this once a month and they all seem to be excellent cooks. 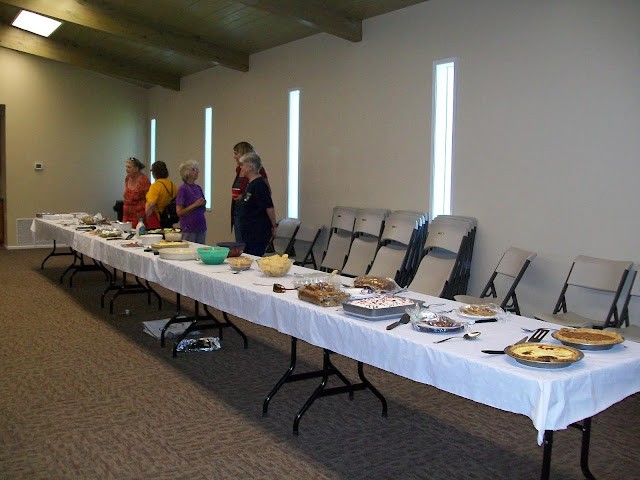 John said I did good, they laughed in the right places and asked quite a few questions, so I guess it was a success.  One of the men asked if I would talk at a potluck for a club he belongs to later this month, I figured why not, I could get use to these potlucks..........!!!  LOL  He's suppose to get in touch with me.