Lynn and Linda are staying busy in Colorado with the donkeys.  Now the triple crown is over I don't think they will burro race again until in September.  BUT.....as of yesterday interest in the inaugural Superior Burro Run October 12th is gearing up. 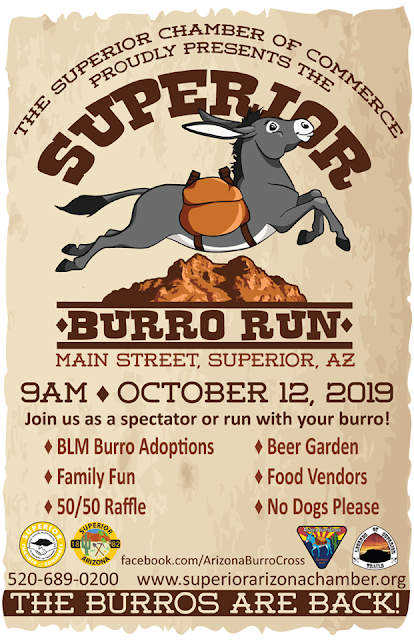 There is a limit of 50 runners, people started signing up yesterday afternoon and as of the last time I checked there are only 8 slots open.

The final race of the Triple Crown was last week-end and the first 2 finishers were women.  Little Buttercup finished 3rd with her male person.  She is really quite a little runner, she had never ran before this summer, but she seems to enjoy it.  She's only 3 1/2, so she could have a long career ahead.


Around here we're fighting the flies.  They are absolutely voracious right now.  Some of the donkeys appreciate the fly spray, others not so much.  Suzanne has been putting fly spray lotion on her hands and wiping the reluctant ones faces..........when she can.  It doesn't take them long to figure out what she is doing.  A couple of them you would have to hog tie to spray them, Penny is one of those.  So is Casper the mini monster mule.....!!  Suzanne has been working with haltering and leading him again.  After the girls left, it's been so hot no one is interested in being worked with, especially Casper.  He's such an independent little guy he doesn't see a need to be worked with at all, thank you very much.  So all the effort is on the part of the human.

Yesterday when it was time to round up for evening feeding, he decided he wasn't going to cooperate.  Suzanne was trying to get him to head in the direction of his pen, but he wasn't having any of it.  He actually went out of the fence and she said he was prancing after he did it.  She yelled at him, he came back in and hid behind a tree, all she could see was his tail switching back and forth.  John decided to get involved in the fray, but couldn't find him.  I got the quad, why walk when you can ride, besides Casper can cover a lot of territory when he wants to and I'd never be able to catch up.  I went to all the trouble to get the quad out of the garage and head for the last place he was seen and saw him quietly walking to his pen, went in like it was his idea and waited for someone to give him a carrot.  He is so much fun to try to outsmart and I'm not sure any of us are smart enough to accomplish it..........!!!  LOL  We've decided he will never go anywhere else, he was 15 years old when he came here and I have no idea how many homes he had before us.  You can read his opinion of humanity and he has learned to rely on himself and no one else.  We know his quirky nature and he knows he can outsmart us and that's OK.  We'll work with him within his boundaries.  I just wish we had a perimeter fence than he couldn't go under, he doesn't seem to go out anymore to escape.  He just goes out to show us he can, usually when someone is watching him.


The flies have been so bad lately, and of course they are really bad around the donkeys mouths I've decided we'll do an extra worming this summer.  We usually worm twice a year, when it cools off in the fall and when it starts to warm up in the spring.  But I'm pretty sure the flies have shared any critters that are on their bodies, like Habronema and it would not be a surprise if the donkeys had swallowed either eggs or larvae...........so.........they will get an extra worming this year.

This morning I started a worming regime with Rosie, because she has a problem with neckworms.  Although the general name for the little monsters is neckworms, they migrate to other areas, like the midline of the belly.

Last year I read an article with a worming schedule that made sense to me.  This poor girl has always had 3 or 4 open sores on her belly in the spring, summer and fall.  So I tried it on her and so far this summer although the sores are on her belly they actually have stayed pretty dry and the flies haven't been interested in them.  Rather than just worming like usual with Ivermectin the article said to worm with Pancur, which hopefully will kill the adults.  Two weeks later start a regime of worming with ivermectin, every 2 weeks for 3 treatments.  That is suppose to kill the young ones.  Hopefully  it will work and maybe next year she won't even have the dry sores on her belly.


I got orders to put the video of Jacque and Sugar practicing on the steps for the Buena Vista race.  Their mom Georgette, allowed them to go to summer camp this summer and has had to learn about their racing exploits 2nd hand.  They have turned into regular little racing burros and really seem to enjoy it.  So here's your kids mom, doing their thing.

Do you have any history on Casper other then him being traded from one home to another?

Not really, he went thru the local sale barn 3 times in 3 months because people would bid on him because he was so cute. They would get him home and he would try to kill their full size horses. He's good with kids and fairly well mannered with anyone, once you get him haltered. He's actually not much different than most mini mules that have been passed around most of their lives. He's had some good training at sometime, but he would prefer that you just leave him alone.

How did the car race go?

Race got cancelled for rain that didn't happen.

Glad you liked the beets.

Alexa said...
This comment has been removed by a blog administrator.
7:18 AM