Not really impressed......we had a couple of days of rainy, cold, windy without sun.......miserable weather.  Of course Lynn is running around in shirt sleeves for the most part and telling us how comfortable it is.  LOL  I'm pretty sure if you live in the desert a few years your body adjusts to sun and warmth and doesn't appreciate less than 60 degrees, no sun and especially wind to go with it.  Oh! well enough whining.......!!

The poor donkeys are out in it.  The only one we really worry about is little Cheyenne, she shivers and seems cold almost every morning.  We don't have an equine blanket small enough to fit her, but drape a people micro blanket over her in the morning.  Usually by the time she is through eating, the sun is up and it's getting warmer, so we take it off before she goes out.  Otherwise the bushes would drag it off her quickly.  Which is one of the reasons I haven't ordered a blanket for her, the only time she could wear it would be when she is in her pen, which is only at feeding time. 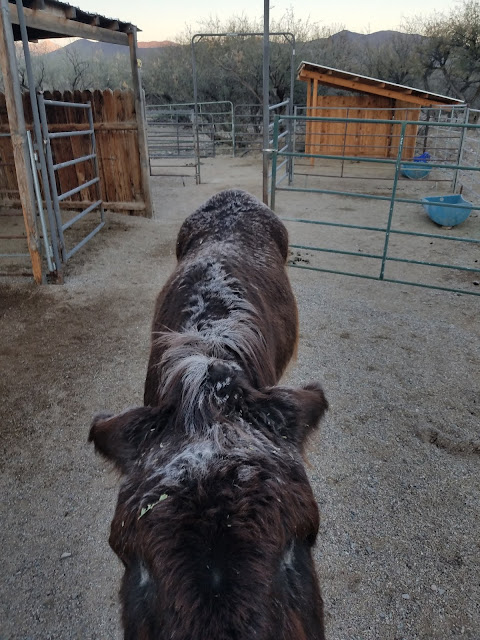 This is what BlackJack looked like this morning with frost on his back.  Actually frost or snow on their back is a sign of good insulation and helps to keep them warm.

When John went out this morning there was steam rising out of the 55 gallon drum that sits over the top of the well head for the water well.  Something was making a horrible noise and there was water running in 2 or 3 directions. 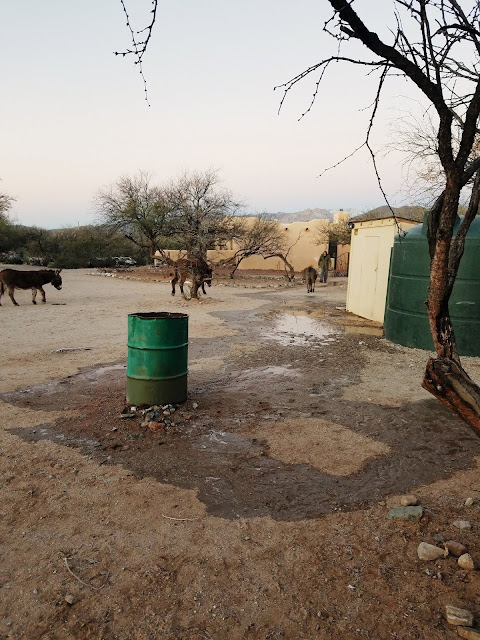 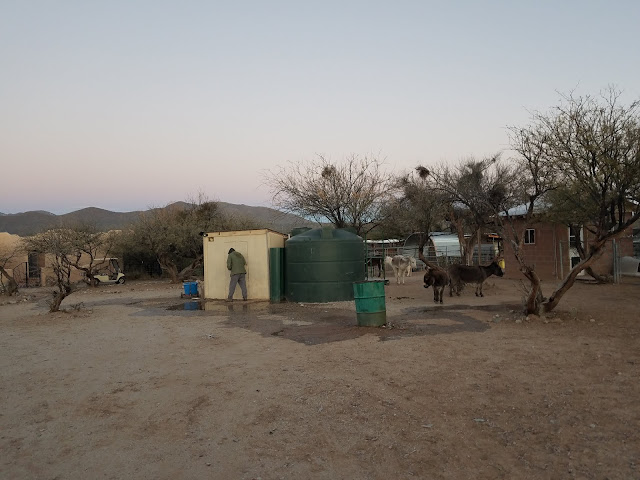 Of course like anything we do around here, we have helpers, whether we want them or not.  They weren't going to step in that water though......!!  LOL 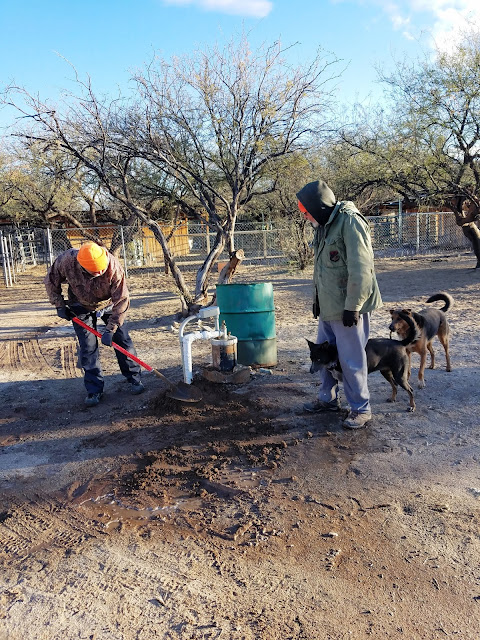 Lynn is digging up where the water was blasting out of the ground around the well head, while John, Lola and Lennon watch.

When Doug left he sold his RV to Lynn and Linda, so they have been busy moving out of their motor home and into the RV.

Doug had put a fence around the RV, but Lynn and Linda like having the donkeys around, especially in the morning, they never know who is going to be outside the door, begging for cookies.  So the fence has to go. 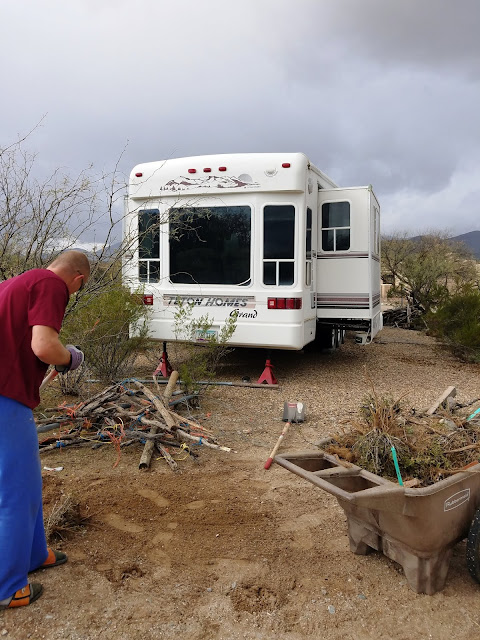 The donkeys knew as soon as the fence was going down and here they came. 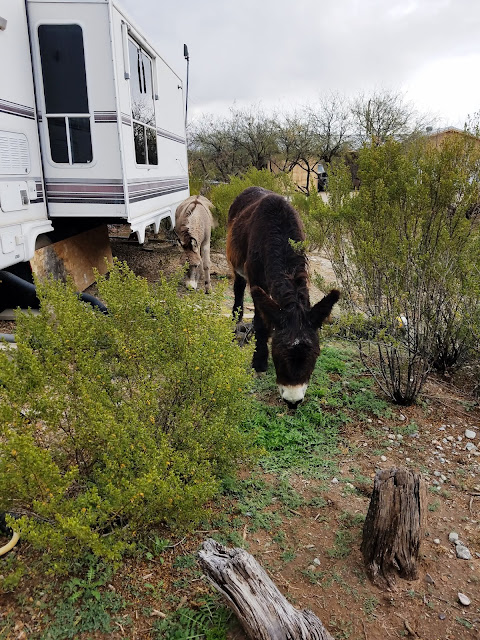 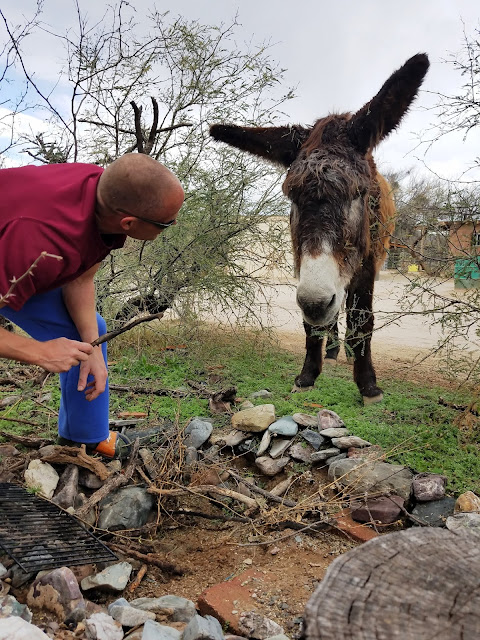 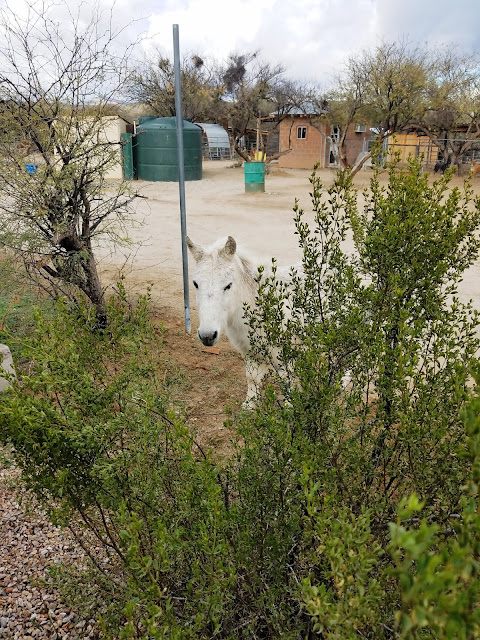 Casper the mini mule checking out the area 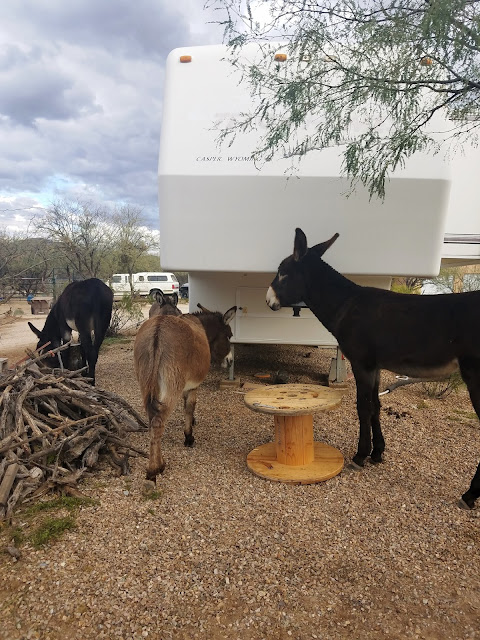 Some of the inspectors checking Lynn's efforts 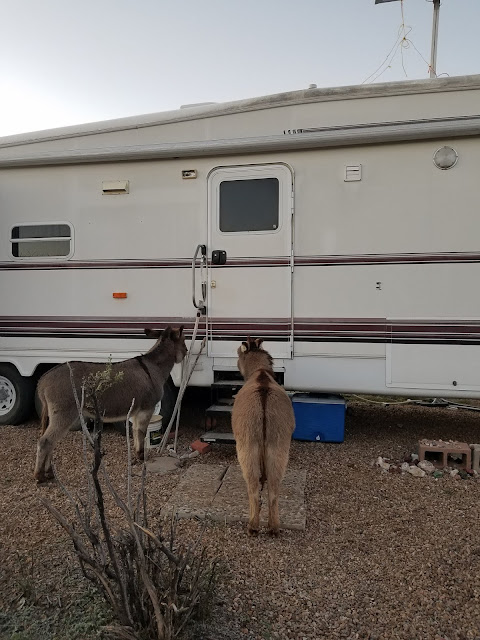 In position to accept cookies
Posted by Tish at 5:59 PM

Thanks for all the pictures...love seeing what's going on there.
We've had some freezing temps here in Waddell. Extra work covering plants, leaving hoses dripping, etc but...maybe no fly masks for awhile!
Say hello to Lynn & Linda & as always hugs to you & John.

It's been this way for days and I guess they are saying 3 or 4 more days before it warms up. We've got sun today, which makes it seem warmer even if it isn't.....LOL Happy New Year to you and your "fur" kids, may next year be a good one for everyone....!!