I've been pretty quiet lately, my computer had to go for a visit with the computer doctor, I got it back about 3 days ago and have been trying to catch up ever since.  It's amazing how much the computer has become ingrained in my daily life.  I'm still not caught up......!!!!  LOL

Even though it's been so hot, we've actually had people coming out to see the donkeys.  Jasper has become a "front and center" type of guy.  He's figured out this tour business and seems to think the people have come just to see him.  So he presents himself pretty much in their face, which of course  is quite thrilling, since a lot of the people have never been that close to a donkey before.  So far no one has ran for their car.........LOL

It's cooled off to the high 90's which is good.  Unfortunately we have pretty high humidity right now and lots of flies even though we use fly predators and fly traps.  Still doctoring Boaz, he has 5 places on him that need twice a day treatment and even then, I'll think he's healing up, go out like I did this afternoon and find one of them dripping blood, probably because it bothered him and he bit it.  That one is on his chest over an old scar from his former life.  This is the 1st year it's been a problem and it's really been a challenge.  Chests are not an easy place to bandage, so I  try to keep it covered with medication that the flies don't like.  I think they just wait until the heat makes the paste or gel melt, so they can do their dirty work.

Tyler is coming out Sunday to reset shoes on Gus, and Gigi and possibly Rosie.  Rosie started limping pretty bad a few months ago and has done real good in shoes on her front feet.  He's talked about leaving the shoes off and might do that this time to see how she does.

Lynn and Linda will be burro pack racing this Sunday at Buena Vista, a 13 mile race.  This is the 3rd race in the Triple Crown, and this year they could have a Triple Crown Winner.  Mary Margaret and her running buddy Kirt Courkamp won the Leadville/Fairplay races, over the last 2 week-ends.  I don't know when the last Triple Crown was won, but I would imagine it doesn't happen very often.   They run 63 total miles in 3 back to back week-ends, which has to be tiring, but obviously these two have figured it out. 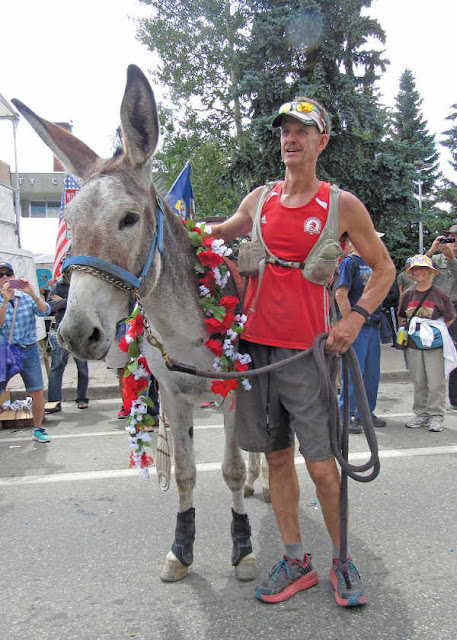 Linda e-mailed me this morning, they were on the road to Buena Vista with all 7 donkeys.   Poor Quilla was going to get left at home by himself, but someone got in touch with Linda to see if she had an extra donkey that could stay in camp with an extra donkey that wouldn't be racing.  Quilla made the cut, and  Linda said he was so happy he hopped in the trailer, ready for adventure.  He has really blossomed, enjoys the parades and was quite a hit at the assisted living home.  People seem to be drawn to him, Linda said at one of the parades people were standing in line waiting to pet him.

This is a video of one of their training sessions, Leddy doesn't seem to be taking it seriously...!!