THE GANG IS READY FOR BREAKFAST 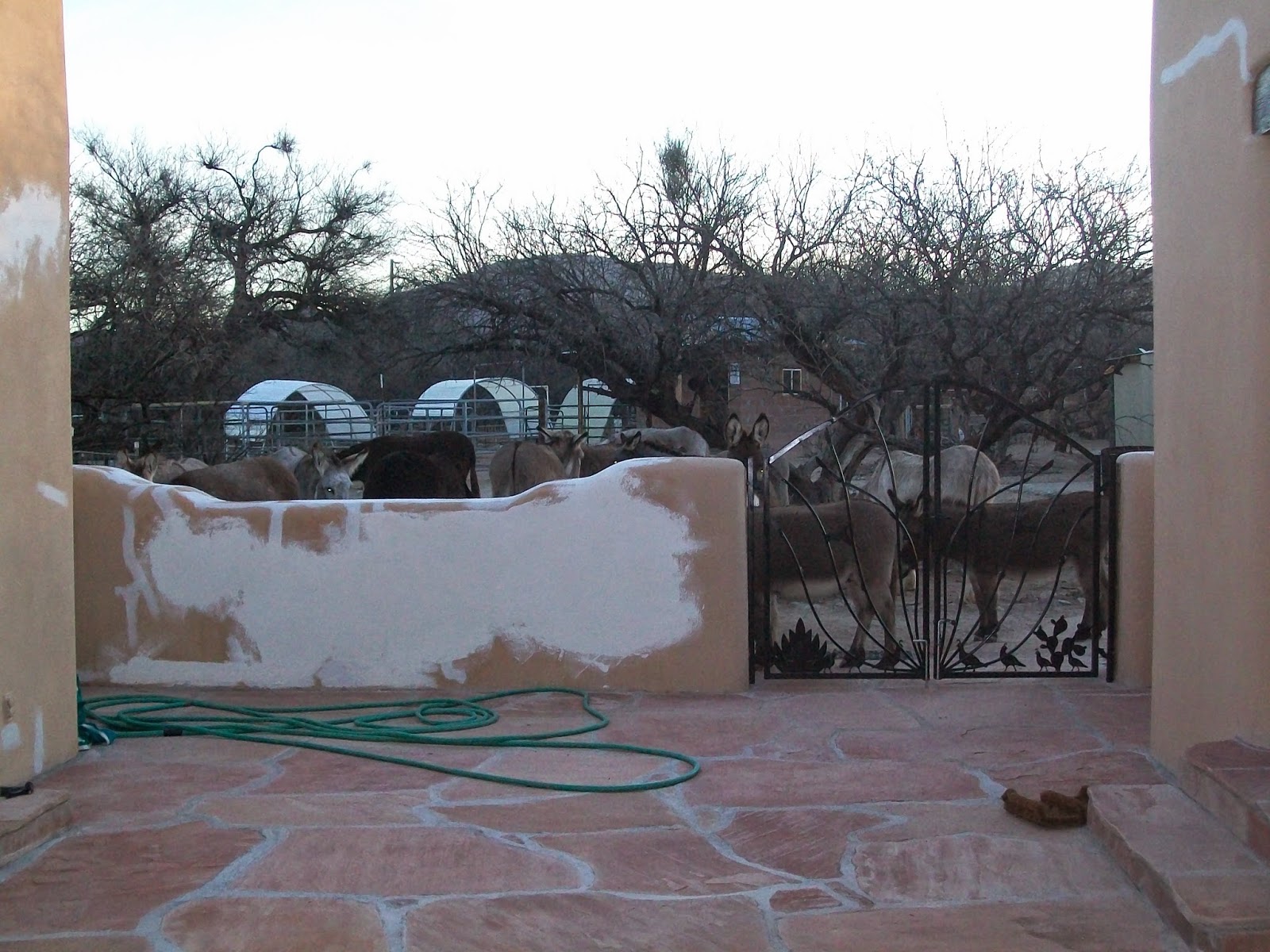 I guess we were late going out this morning, almost everyone was at the gate.  As soon as John went out, most of them disappeared into Burroland.  Justin tried eating on the gate, but found out metal isn't as much fun as wood I guess.......LOL

I've had pairs of Whinny Warmers for years and have been debating putting them on Pepper to help keep his poor old knees a little warmer.  Good idea, BUT, they are a tussle to get on and he has a problem standing on 3 legs for any length of time.  John and I went out yesterday morning to give it a try.  He did pretty good, we ended up raising his hoof enough to get the sox started over the hoof.  Then John let Pepper lean on him to take some of the weight off that foot and I pulled and tugged to get it clear of the bottom of his foot that was still on the ground.  They now have hock and knee covers that can be used in conjunction with the warmers.  I've just always pulled them above the knee, but you have to keep pulling them up.  I would imagine the "covers" would stay on the knee much better. 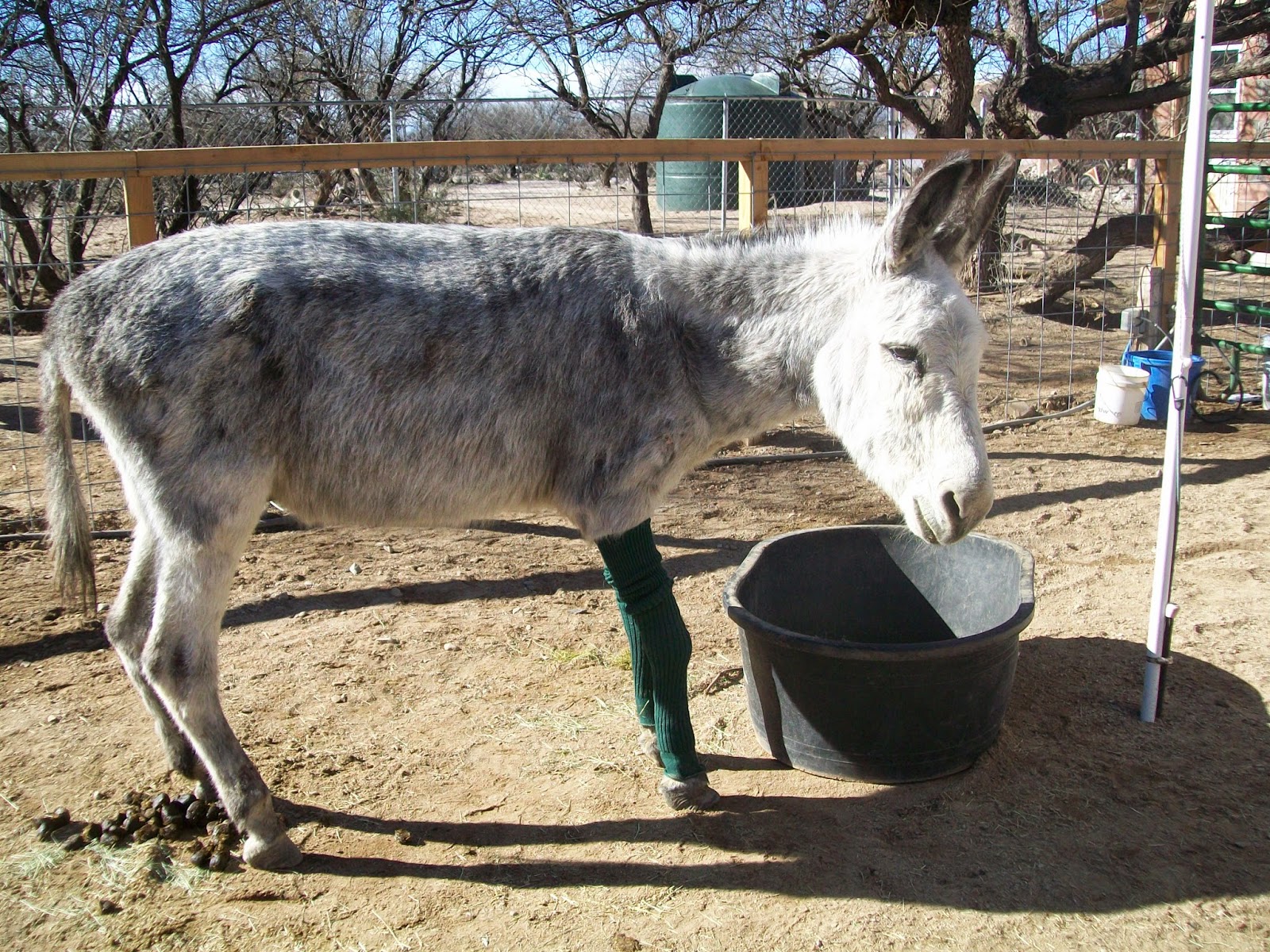 Anyway he looks pretty spiffy, hopefully they will help keep his legs warm.

Yesterday we hauled Dixie to her new home.  Terry had been looking for a girlfriend for Jill aka Molly, since Jack decided he'd rather hang out with his big buddy Leo.  She's a very sweet little girl, well mannered and cute as a button.

She was being sold on Craigslist, but really didn't need to go out in the real world, because she is knocked-kneed and has a significant underbite.   As a mini, actually she is half shetland and half mini horse, with those legs she doesn't need to have kids piling on her back.  She's only 3 years old, so she could have a long life of mistreatment in the wrong hands.  Not a problem with Terry, her home is FOREVER and EVER.

Heard from Terry that Jack is being his usual obnoxious self.  He's decided that she can't get close to anyone else.  Of course she isn't in the same pen with them yet, so all he's doing is running at the fence, making ugly faces.  I think he has some form of OCD, his world is his world and it has to run according to his rules.  LOL
Posted by Tish at 9:50 AM

Pepper has some sexy looking legs there. I know you must be having some cold weather. Here in Florida it is to be in the 30's the next few nights.

That's cold for Florida, cover up.

It has to be about 27 for three or four hours for citrus to freeze, when they freeze if you can get them picked before they thaw they can be used for juice. For the strawberries they spray water over them and make a thin layer of ice and that insulates them from freezing. We are to start warming up now.

Hope you're continuing to warm up. Our weather is suppose to be nice the next few days. I hope so, the big 6 nights of racing starts tonight. John and I raced in it last year, but not this year. Still no dirt track for me to race at this year. bummer..!!