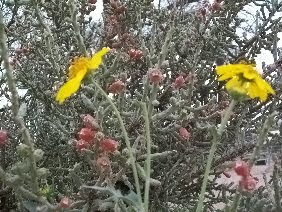 This is a picture of a survivor.  This little desert daisy (I use that generic ID, because there are dozens of little yellow desert flowers that to me look the same) managed to nestle down under some Desert Christmas Cactus, & escape being devoured by a sharp eyed donkey.  At least so far, I would imagine now that it's gotten tall enough to show up, someone will take care of it.  They usually stay away from the Christmas Cactus, so I assume it protects it's little guests, effectively.
Jenny is coming in almost every morning with prickly pear spines in her face.  Yesterday she had one in her lip, that was so deep I almost couldn't get it out, poor girl.
It's about time for fly masks for all.  We've been putting masks on as eyes start running.  So far the flies aren't too bad.  I started putting out fly predator wasps a couple of months ago, & even though we've had hot weather, the flies aren't really being a problem. .......yet!!! So far just the old guys, & Rusty with his pink skin have masks.  I'm putting off the masks as long as possible, so they can continue to go over to Burroland during the day.
I've been keeping Cisco's sheath covered with thunja zinc oxide, which the flies hate, so hopefully we can keep ahead of the habronema larvae this year.  So far so good.  He's always had a problem with a massive breakout in his armpit that really gets to be a mess.  I checked him a couple of days ago, & his armpits were literally dripping with sweat.  I assume this has something to do with his immune system problems, but have no idea how.  I started putting cornstarch on him, & last night I clipped one armpit, to see if less hair will make a difference.  I spend a lot of time trying to outsmart their health problems, it seems.

Since Sha'ba has a problem with habronema on his sheath too, I checked him this morning.  Although he doesn't have any open areas, he was so itchy I thought he was going to fall over when I scratched him.  He ended up chewing on his leg, I guess he was helping me scratch, poor little guy.  I wormed him this morning, & put some Ivermectrin on his sheath.  I will check him daily, to hopefully keep ahead of the problem. 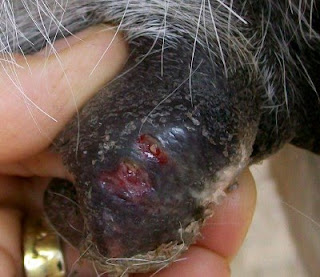 The picture is one I took last year, when the season started.  The white spots are habronema larvae. There's at least five of them showing.  The one in the top sore, is about the size of a grain of rice.  The little white dots are still growing.
Posted by Tish at 12:59 PM