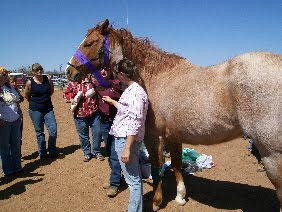 HEALTH CLINIC BY DUSTY PRENTICE, DVM
Today John & I attended a clinic in Sierra Vista.  There were over 100 people there to learn what to do until  the vet gets there in case of an emergency.  It was really interesting & a lot of fun.  We learned about how to test for different type of lameness, how to check for gut sounds, respiration, & how to bandage wounds.  They had about 7 or 8 "gentle" horses there for us to "practice" on.  They really were good about all this silliness.  They got legs bandaged with standing bandages & also we did knees for cuts using gauze pads & vet wrap. Found out why my leg wraps usually crawled down the leg.  I always have wrapped around & around level.  Found out you are suppose to wrap at an angle.  And use a figure 8 method, rather than just up or down the leg.  Hopefully I can remember everything I learned, when the time comes, hopefully never...........!!!   (G)
You'll notice this big guy has something purple wrapped around his head.  We were "doctoring" him for a massive heavy bleeding wound underneath his jaw.  We covered the "wound" with an unopened roll of gauze to stop the blood from gushing & used vet wrap to hold it in place.  The purple stuff is the vet wrap.  You can't hardly see the green bandage on his "cut" knee.  We'd cut off the old "bandages" & wrap him again & again.  He was resigned to his fate & put up with lots of people, doing their thing.
A couple of friends were also there, one we hadn't seen for over 2 years, so that was nice.  The other one was Gus' new family.  They really are enjoying him, & he has a horse buddy named Chief.  From what Amy said they play a lot.
We got home late, ran out & started slinging hash, so to speak.  Actually when we drove in they were all around the gate.  I don't know if they were waiting for us, or what.  Even Tula was there.

After we put out the soaked feed, I noticed Daisy was choked.  Grrrrrr........!!!!   She will NOT under any circumstances eat soaked food, doesn't matter what it is, if it's wet, she looks at you with sad eyes & walks away.  So I have been giving her about 1/2 cup of timothy pellets, in a flat pan, so she gets something when the others get theirs.  For some reason tonight she managed to get them stuck.  She hadn't cleared when we came around with the hay, & I looked over & Chico was also choked.  He & Lupe have been getting a cup of timothy pellets, mixed with 2 large spoons each of soaked beet pulp & Lakin Lite, so there is a lot more volume of soaked food than dry pellets.  And the pan they are fed in is about 2 feet in diameter & we spread it out, so Lupe can't get it all.  So it should be difficult for him to gobble up a lot at one time.  John worked with Daisy & she cleared pretty quick.  But we had to work with Chico for about 15 minutes before he started licking his lips.  They are both just fine now, thank goodness, I swear these guys work at making my hair even grayer than it is.............!!!!  (G)
We are planning to take Lupe & Chico home Tuesday.  I'm pretty sure Lupe is pregnant, so even if he dropped this summer, he could still stay with her, at least until she foals.
Posted by Tish at 8:31 PM