Even as I write the wash that runs across the property is running bank to bank. So much for the monsoon season being over. Unfortunately there are more than a few donkeys on the other side, & it's about time to start evening chores. The rain & wind knocked down enough mesquite beans that they probably won't even think about hay for awhile.
This morning John was out looking for a wayward fly mask, & said he didn't see many mesquite beans, (that was before the wind & rain) so we decided to let everyone out today. He's going to walk over on Burroland tomorrow & see how the bean situation is over there. If the cows have done a good job of cleaning them up, then we'll let the donkeys start going over there again. 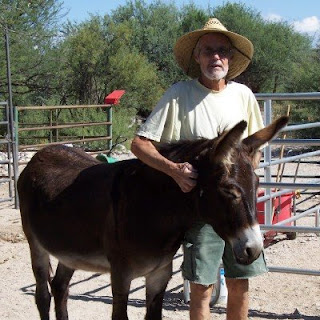 This morning when we let them out I heard the dogs running & barking. Justin & Pepsi, the 2 little mini geldings were running like little bitty race horses. They were even braying while they were running, which doesn't look like it would be easy to do. I guess they were really happy to be FREE........!!!! Pretty soon Lynn joined in the race or at least tried to. I guess Cheyenne was too lady like to run around like a maniac, she didn't participate in the fun. Too bad I didn't have the camera.
Posted by Tish at 5:08 PM