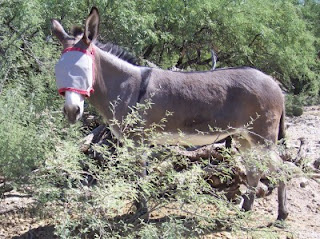 Well I guess Chester is getting settled into his new home OK. In fact he & Tula have become quite the "item" & stay together when they are out. Not sure that's a good idea, she usually leads whoever runs with her astray & tries to get them to run WILD.....or at least to stay over on the 20 acres we call Burroland, rather than come over to be fed, like a TAME donkey. They've stayed over there 2 mornings rather than come over with everyone else. John & I had to go over & round them up, or at least head them in the right direction & hope they went thru the gate. What's really odd is old Pepper is hanging with them also. Not sure what that is about, Tula has never paid any attention to him before. It's always interesting to what the dynamics of the "herd" are on a daily basis.

Chester of course is still crippled on his broken shoulder, but it doesn't slow him down much. When he runs, (yes he does run) he runs almost without a limp, which is really pretty to see. He doesn't seem to be in pain & I told John when he's running he probably doesn't have to think about his leg. I've been massaging the enlarged part of his leg between the shoulder & the knee every morning, & he really likes it. He will lower his head almost to the ground, & stand as long as I'll massage.